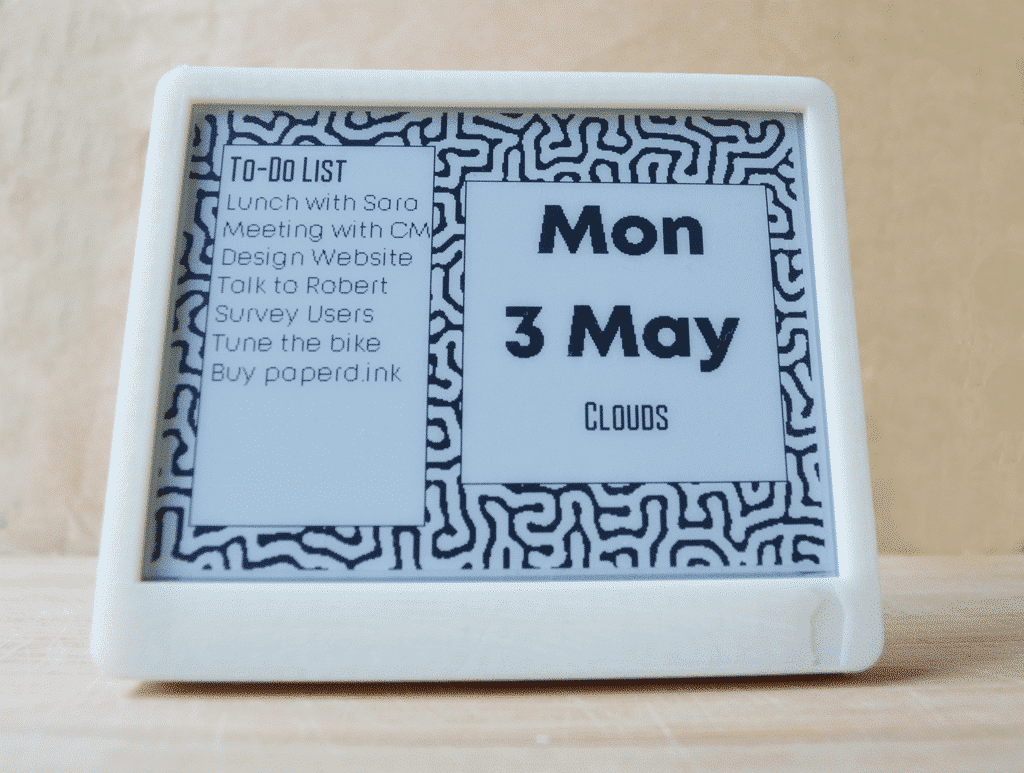 If you have been waiting for an e paper-based desktop display board to show important information such as the date, do-to list, notification, weather info, and other related stuff, here it is, the paperd.ink. To get you started on this, paperd.ink is described as a simple and low-power e-paper development board that is fully hackable and open-source as well, which means users will have complete freedom in customizing the way they’d like the display to function.

Users will have the option to program the device using Arduino, Micropython, or ESP-IDF. Even the enclosure too is customizable as users can design it the way they’d want to. That includes 3D printing a rad design, with the STEP files kept open specifically for this purpose. Overall, it is a basic minimalistic design theme that has been adopted with a greater focus on productivity and functionality.

On offer will be two versions of the device, which include one with the enclosure and another without it. For those who’d like to opt for the device sans the enclosure, the STEP files are available to download via Github so that users can 3D print their own enclosures. The standard enclosure, on its part, is made of ABS white material that is 3D printed using the SLA process.

To elaborate further on the design aspect, the device comes with a set of four buttons along its right edge while on the left, there is a microSD card slot and a USP port. On the rear, there is the connector port along with a hook and a stand. That way, the device can be hanged on the wall or simply placed on a flat surface via the stand.

Coming to the specs, it’s a 4.2-inch e-paper display that dominates the front. The black & white monochrome display has a resolution of 400 x 300 pixels and a DPI of 120. The display also has a full refresh rate of 3 seconds while supporting partial refresh as well.

At its core, the paperd.ink comes with an ESP32-WROOM-32 microcontroller, which, as already stated can be controlled via the micro USB port that it comes with, besides also being supported by Arduino, micropython, and ESP-IDF. Powering the device is a dual-core microprocessor rated at 240 MHz coupled to 520 KB of SRAM and 4 MB of SPI flash memory.

Wireless technology the device supports include Wi-Fi 802.11 b/g/n and Bluetooth v4.2. Another highlight of the device includes a 2000 mAH LiPo battery that it comes powered by that will let it function for months on a single charge. The battery though is not included in the standard package and has to be procured extra.

The project is crowdfunded and is the brainchild of the Pune, India-based engineers, Rohit and Prasad. The amount being sought is Rs. 2,199,060, of which 30 percent or Rs. 664,732 has been secured so far with 17 days still left. Those interested can book their slot at the Indiegogo site where the device is listed.