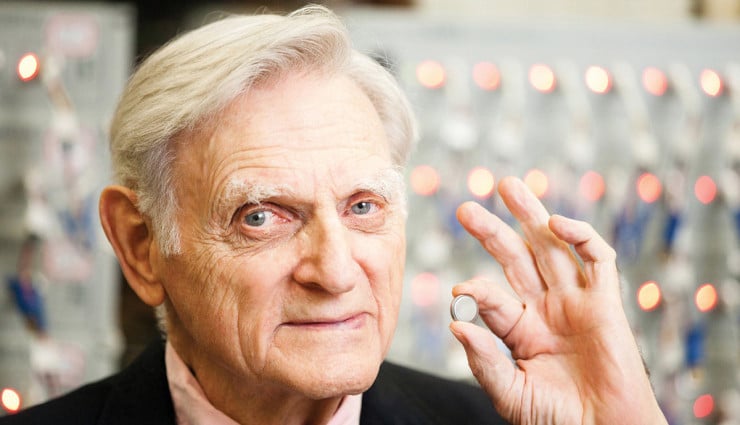 The inventor of the Lithium-Ion battery has just developed the first all-solid-state battery cells that are noncombustible and has a long cycle life with a high volumetric energy density and fast rates of charge and discharge. Your future Kindle or Nook may employ this new battery and instead of just one month usage, you may have six will fully recharge in just 10 minutes.

John Goodenough is the original inventory  of Lithium-Ion and he is 93 years old.  His engineering team described their new technology in a recent paper published in the journal Energy & Environmental Science.

“Cost, safety, energy density, rates of charge and discharge and cycle life are critical for battery-driven cars to be more widely adopted. We believe our discovery solves many of the problems that are inherent in today’s batteries,” Goodenough said.

The use of an alkali-metal anode (lithium, sodium or potassium) — which isn’t possible with conventional batteries — increases the energy density of a cathode and delivers a long cycle life. In experiments, the researchers’ cells have demonstrated more than 1,200 cycles with low cell resistance.

I don’t expect this new battery tech to be available for a few years in e-Readers, smartphones and tablets. The team is currently filing patents and looking for vendors to develop prototypes to test out how the battery works.