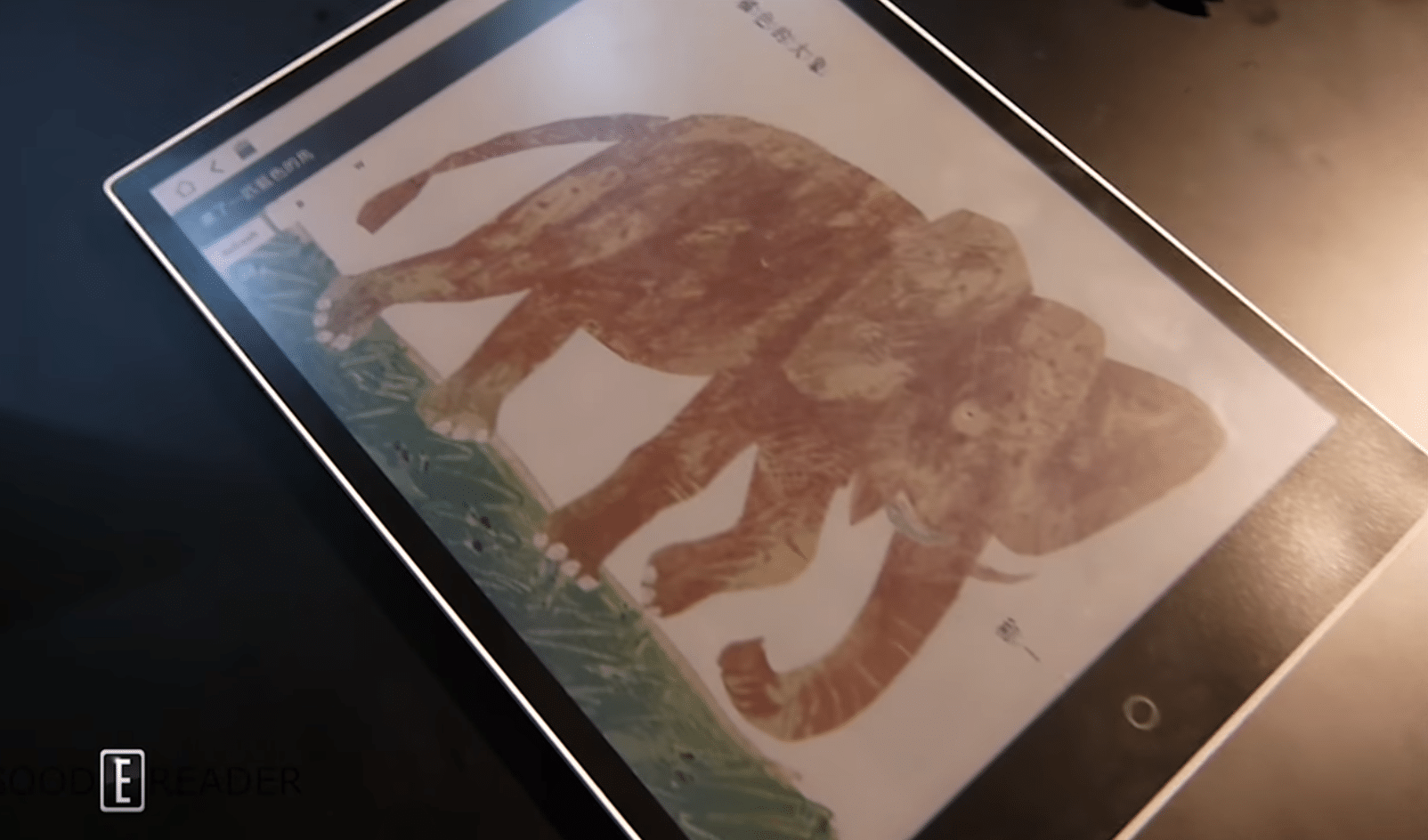 Good e-Reader had the worldwide exclusive of the new E INK color e-paper that debuted at the one day Wacom Connected Ink event in Japan.  The only people who were invited to the event were people involved in the e-paper industry, and of course Good e-Reader was there. We have learned this technology now has an official name, Print-Color e-paper.

Print-Color e-paper E Ink can produce color for each pixel that is displayed on the screen. This includes  red, green, blue, black or white. Colors can be combined to give you different colors or shades. The way it works is if you want light blue, blue will be toned down and white will be brighter. If you want orange, then yellow and red would be blended. It will ultimately display thousands of different color combinations, and perhaps even more for the final production model.

The engineering sample we saw had a bright and vibrant color scheme. There were all sorts of apps installed on the device and there were a bunch of shades. The drawing experience only had red, green, blue and black primary colors to select from, but this was a prototype. It also had a E Ink Regal waveform controller, that increased the refresh rate. There was no ghosting or anything that really detracted from running apps or drawing.

A senior E Ink Engineer explained the new technology in a statement to Good e-Reader. “The new color e-paper sample that Peter saw was a CFA (Color Filter Array) type ePaper display, but instead of using glass-based CFA, the color filter is now printed on the E Ink ePaper film. That being said, it inherent all the characteristics and benefit s of B/W ePaper displays, still a reflective display technology, in addition it can displays color content. The color ePaper module itself will be thinner and lighter than the ones with glass-based CFA display module.

The samples showcased at the Connected Ink event used a 10.3” display module with front light (no backlight) and Wacom EMR as testing vehicle and demonstrated the color and writing experience.
It is an early stage prototype, we are still working on the display performance. It can display thousands of color combinations and the whole color and writing experience will be improved over the next few months.”

Netronix, one of the largest companies involved in the design and manufacturing of e-readers told Good e-Reader that they are currently evaluating the technology and have already received significant interest from all of the companies they deal with. They did not mention any names, but some of their bigger clients include Barnes and Noble, Kobo and Mobiscribe.

I was told by various senior level E Ink executives that companies based in China and Europe have already received prototypes of the new e-paper for testing. A number of companies have already placed orders.

Print-Color e-paper is still in the prototype stage and should be refined to be thinner and display more colors in the coming months. It will be completely ready by Q2 2020 and we should see a slew of digital note taking devices in Q3 2020. I was told this technology is initially going to be integrated into digital note taking devices, or E-Notes.

If you have never heard of a digital note taking device before, or E-Note, it is basically a larger screen E Ink device that has multiple layers, including a Wacom active digitizer. It allows you to interact with the screen with a stylus to draw, take notes or edit PDF files. They are often expensive and aimed at creatives or business users. Products include the Sony Digital Paper, Onyx Boox MAX 3, Remarkable or the Likebook Alita. These companies have the strongest likelihood of releasing colored products next year.

Digital note taking devices were the only target niche for Print-Color e-paper. Consumer driven e-readers such as the Kindle, Kobo or Nook were not even mentioned at the event, but it is not completely rule out that they will take a gamble on this new tech.