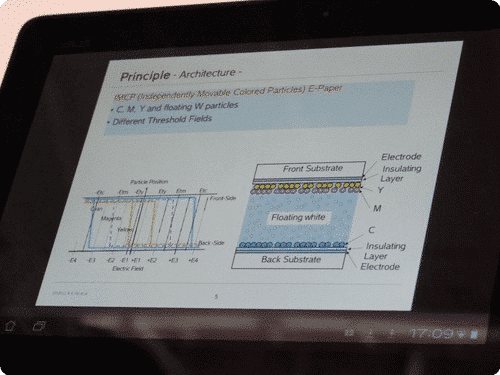 Last week, one of the biggest e-paper conferences, SID, was held in Boston. Fuji Xerox had their line of e-paper technology on display at the event, one that the company claims is far better with its color display qualities. Fuji Xerox revealed this has been achieved by removing the color filter, which has resulted in a more vibrant display.

The technology that is used in this e-paper is that each color has been set a different threshold. The color particles to be drawn would be different as the charge that is applied would differ depending on the threshold set for that color. The drawing takes place on the back of the display board. However, Fuji has stated it is still in early stages with the e-paper technology. The prototype uses two colors, while plans are afoot to use three colors in the full color e-paper. The prototype is a 5 inch screen with a resolution of 600 x 800 pixels. The resolution can be considered to be a bit low for mass production.

Fuji is not alone in the race, as there are other companies that are experimenting with this type of working principle. The Mirasol display from Qualcomm is one. However, while e-paper can be extremely frugal in their energy requirements, the cost factor is proving to be the main hurdle for the progress of this technology. Compared to LCD and AMOLED based screens, this form of e-paper has turned out to be very costly. Another deficiency with the Mirasol screens is that they lag in color brightness.