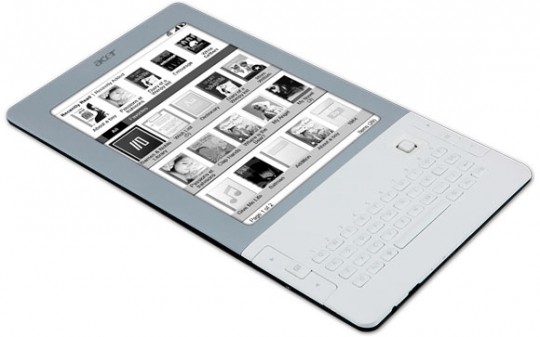 After Samsung, its now Acer‘s turn to heat things up at the IFA event to be held in Berlin from the 3rd till 8th of September. For as per the latest e-reader news, Acer has announced they will be unveiling their LumiRead e-book reader at the premier show next week. And once that’s done, the LumiRead will be seen sharing shelf space with other gadgets from October, at least in Germany.

As for the e-reader, what is known till now is pointing to a device that has e-paper display based on the e-ink technology while screen size is limited to 6 inches with a display resolution of 800 x 600 pixels. The LumiRead e-reader does not disappoint on other aspects like its got Wi-Fi, integrated 3G modem along with affiliation with the Barnes & Noble book store which is the official content partner.

The LumiRead also boasts of access to one of the most extensive e-libraries in the German language. This apart, another unique aspect of the LumiRead is its built in ISBN barcode scanner, perhaps a first in any e-reader. What the barcode scanner is supposed to do is to enable its users to scan the barcode of all the titles that they wish to procure in future. However, its not known as of now if such a thing is an absolute necessity in an e-reader or how consumers might react to it.

However, the decent looking e-reader that the LumiRead might be but it has failed to excite many with its price tag, which at €250 or $318 can’t exactly be said as affordable or cheap. More so when the new much improved Kindle is selling for $189 for the 3G version. As a solace, though such a figure has cropped up, there are many who believe the price has to be confirmed. So perhaps there is hope the final price is a bit more easy on the pockets.