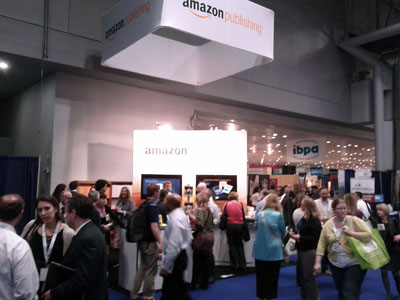 Amazon has broken a lot of molds in the business of books, starting with its own online retail model and expanding outward. As the parent company over two distinctly different methods of independent publishing—CreateSpace for print-on-demand physical books and Kindle Direct Publishing for ebooks—the opportunities for book development are more available than ever.

Today, Amazon Publishing announced its newest imprint, 47North, its science fiction, fantasy, and horror division. The name stems from the coordinates for Seattle, the hometown of Amazon.com. Details were issued in press release this morning.

“Amazon customers have a huge appetite for science fiction, fantasy and horror books, and we are thrilled to have the opportunity to introduce readers to new and established voices in these genres,” said Victoria Griffith, Publisher, Amazon Publishing, West Coast Group, in the press release. “We are especially happy to have a diverse list at launch, and look forward to publishing across a wide range of subgenres.”

Several series and authors are already working with 47North, including Lee Goldberg and William Rabkin, with their digital-first novel, Face of Evil, which will publish in October 2011. Four more installments will also publish in October, with a new title coming each month following the original release; a print compilation of the first three novels will publish in January 2012. Also, Dave Duncan’s Against the Light will be released in January 2012 as well.

A compilation of works is underway from Hugo and Nebula Award-winning authors Neal Stephenson and Greg Bear, who have developed an ensemble of respected authors and newcomers to create the Foreworld series. The series will begin with The Mongoliad trilogy, an epic tale about the birth of Western martial arts. The Foreworld series will begin with the publication of The Mongoliad: Book One in April 2012.

Fifteen books in all make up the initial launch of 47North, from a variety of award-winning and prolific established science fiction and fantasy authors. 47North marks the seventh individual genre-based imprint of Amazon Publishing.

New science fiction, fantasy and horror imprint debuts with 15 books to be published in 2011 and 2012

SEATTLE—October 11, 2011—Amazon.com Inc. (NASDAQ: AMZN ) today announced the launch of 47North, the seventh imprint from Amazon Publishing, focused on science fiction, fantasy and horror. 47North launches with 15 books, including “The Mongoliad: Book One,” the first in the ambitious, five-book, collaborative Foreworld series led by Neal Stephenson and Greg Bear. All of these books will be available to English readers in Kindle, print and audio formats at www.amazon.com, as well as at national and independent booksellers. 47North will publish original and previously published works, as well as out-of-print books.

“Amazon customers have a huge appetite for science fiction, fantasy and horror books, and we are thrilled to have the opportunity to introduce readers to new and established voices in these genres,” said Victoria Griffith, Publisher, Amazon Publishing, West Coast Group. “We are especially happy to have a diverse list at launch, and look forward to publishing across a wide range of subgenres.”

47North will launch with the following books & series:

· Together, Lee Goldberg and William Rabkin are the authors of “Successful Television Writing” and have written and/or produced scores of highly successful network television series, including Diagnosis Murder, Spenser: For Hire, Baywatch and many more. Their digital-first novel, “Face of Evil,” which will publish in October 2011, is the first novel in The Dead Man series. Protagonist Matthew Cahill gains new sight into the netherworld after a terrible accident, making each day a living nightmare. Four more installments will also publish in October, with a new adventure following each month thereafter. Additionally, a print compilation of the first three novels will publish in January 2012.

· Prolific science fiction and fantasy writer Dave Duncan’s “Against the Light” tells the story of a young, magical missionary’s arrest for heresy and treason in the land of Albi. Duncan is best known for fantasy series The Seventh Sword, A Man of His Word and The King’s Blades. “Against the Light” will be published in January 2012.

· Arwen Elys Dayton’s action-packed science fiction novel, “Resurrection” centers on warring alien races and the two star-crossed pilots who hold the key to salvation. The fan-favorite novel has been out of print for years and will be brought back into print by 47North in January 2012.

· Aric Davis’ previous novel, “Nickel Plated,” was named by Booklist as one of the Top Ten Crime Novels for Youth in 2011. Now, Davis turns his attention to the macabre in the all-new “A Good and Useful Hurt,” in which tattoo artist Mike’s life is torn apart when a supernatural, psychopathic killer targets him and those he loves. “A Good and Useful Hurt,” Davis’ first adult novel, will be published in February 2012.

· A new edition of the first book in Evan Currie’s popular military space opera Odyssey series will be published in March 2012, now entitled “Into the Black: Odyssey One.” 47North will also publish its sequel later in the year.

· Best-selling UK author Stephen Leather’s new Nightingale series will be published by 47North starting in March 2012. “Nightfall,” “Midnight” and “Nightmare” are fast-paced supernatural thrillers that follow former cop and struggling private investigator Jack Nightingale who is forced to confront the possibility that demons exist after inheriting a supernatural mansion.

· Hugo and Nebula Award-winning authors Neal Stephenson and Greg Bear have teamed up with an ensemble of respected authors and newcomers to create the Foreworld series. The series will begin with The Mongoliad trilogy, an epic tale about the birth of Western martial arts. The Foreworld series will begin with the publication of “The Mongoliad: Book One” in April 2012.

· New York Times best-selling author Chris Roberson lends his ear for humor and the otherworldly in “Further: Beyond the Threshold,” to be published in May 2012. Roberson is best known for his DC Comics/Vertigo work in the Cinderella series and iZombie. “Further” is a novel about a space explorer who is kept in stasis for too long and awakens to a universe that is terrifying and unfamiliar.

· B.V. Larson has published over 20 novels in genres ranging from military science fiction, to epic fantasy, to paranormal romance. 47North will publish the next two novels in his urban fantasy series, Unspeakable Things, in June 2012. In the first book, “Technomancer,” Larson’s detective Quentin Draith is tasked with solving impossible crimes, and each clue leads him further into a world that exists between the raindrops of the known world.

47North, whose name is based on the latitude coordinates of Seattle, joins sister imprints AmazonEncore, AmazonCrossing, Powered by Amazon, Montlake Romance, Thomas & Mercer and the New York imprint in the Amazon Publishing family.

Amazon.com, Inc. (NASDAQ: AMZN), a Fortune 500 company based in Seattle, opened on the World Wide Web in July 1995 and today offers Earth’s Biggest Selection. Amazon.com, Inc. seeks to be Earth’s most customer-centric company, where customers can find and discover anything they might want to buy online, and endeavors to offer its customers the lowest possible prices. Amazon.com and other sellers offer millions of unique new, refurbished and used items in categories such as Books; Movies, Music & Games; Digital Downloads; Electronics & Computers; Home & Garden; Toys, Kids & Baby; Grocery; Apparel, Shoes & Jewelry; Health & Beauty; Sports & Outdoors; and Tools, Auto & Industrial. Amazon Web Services provides Amazon’s developer customers with access to in-the-cloud infrastructure services based on Amazon’s own back-end technology platform, which developers can use to enable virtually any type of business. The new latest generation Kindle is the lightest, most compact Kindle ever and features the same 6-inch, most advanced electronic ink display that reads like real paper even in bright sunlight. Kindle Touch is a new addition to the Kindle family with an easy-to-use touch screen that makes it easier than ever to turn pages, search, shop, and take notes – still with all the benefits of the most advanced electronic ink display. Kindle Touch 3G is the top of the line e-reader and offers the same new design and features of Kindle Touch, with the unparalleled added convenience of free 3G. Kindle Fire is the Kindle for movies, TV shows, music, books, magazines, apps, games and web browsing with all the content, free storage in the Amazon Cloud, Whispersync, Amazon Silk (Amazon’s new revolutionary cloud-accelerated web browser), vibrant color touch screen, and powerful dual-core processor.

This announcement contains forward-looking statements within the meaning of Section 27A of the Securities Act of 1933 and Section 21E of the Securities Exchange Act of 1934. Actual results may differ significantly from management’s expectations. These forward-looking statements involve risks and uncertainties that include, among others, risks related to competition, management of growth, new products, services and technologies, potential fluctuations in operating results, international expansion, outcomes of legal proceedings and claims, fulfillment center optimization, seasonality, commercial agreements, acquisitions and strategic transactions, foreign exchange rates, system interruption, inventory, government regulation and taxation, payments and fraud. More information about factors that potentially could affect Amazon.com’s financial results is included in Amazon.com’s filings with the Securities and Exchange Commission, including its most recent Annual Report on Form 10-K and subsequent filings.