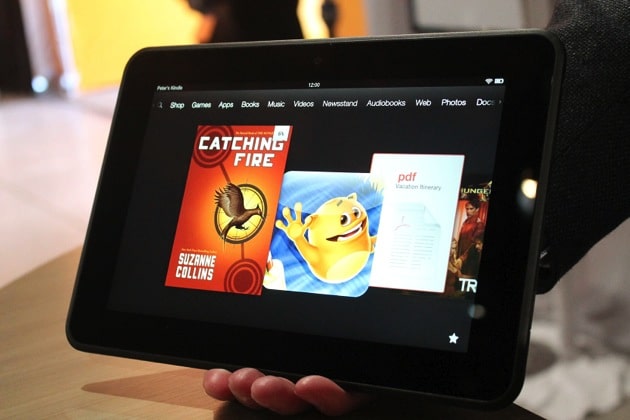 The Amazon Kindle Fire HD 8.9 is the companies first large screen tablet and is available to ship starting toady. The 4G/LTE version will be available in coming weeks and customers will be able to get 250 MB of Data every month for a one time fee of $49.99.

The Kindle Fire HD 8.9 is basically going head to head with the Nook HD+ and the Apple iPad this holiday season. It features a vibrant  8.9”, 1920×1200 resolution display at 254 ppi. The speaker system mirrors the Kindle Fire HD 7 with Dual stereo speakers with Dolby Digital Plus audio-the standard in high-end audio-available. You will be able to initiate video conferencing with the front-facing HD camera for taking photos, shipping with the unit includes a custom Skype application for free video calling from around the world.

On the software side of things, most of the new features were fairly evident in the Kindle Fire HD 7. You have groovy new things like immersion reading, Whispersync for Voice, X-Ray, X-Ray for Movies, Kindle FreeTime and Amazon Videos. Of course, with the Android OS, you will be able to download thousands of games and apps.

I think this tablet will be a huge winner because of the added screen real estate. Most Android editions on the market are of the seven inch variety and often have fairly poor resolution. The Nook HD+ and Kindle Fire HD 8.9 bring basically the same things to the table, but have distinctive ecosystems. Next week, we will be putting these two through a battery of tests on our YOUTUBE Channel.

The tablet is mainly available to customers living in the USA, UK and select countries in Europe. The price depends on where you live, but the American version is slatted to be around $299.99.  Kindle Fire HD 8.9” is also available at Best Buy starting tomorrow as well as additional retailers like Staples and Radio Shack in the coming weeks. The Kindle Fire HD 8.9” 4G will ship next week. If you live outside the USA, you can order this device today via Shop e-Readers.