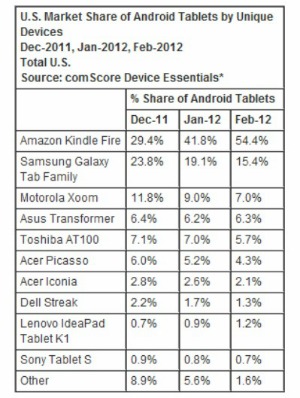 The Amazon Kindle Fire is growing in popularity and now controls 54% of the entire Android market segment. Its rivals such as the Samsung Galaxy Tab and Motorola Xoom are seeing diminished returns.

The Kindle Fire has seen tremendous market growth since it launched last November. During its first quarter it garnered 29% of all Android sales. In January it increased its lead to 41.8% and February climbed even higher to 54.4%.

The Apple iPad obviously dominates the entire tablet market but Amazon is biting into their market. Apple had 61.5% of the global market in the third quarter of 2011, but that share fell to to 54.7% in Q4 2011, largely because of the success of Kindle Fire.

What about the Nook Tablet and Nook Color? It seems it did not even get into the top 10 in the recent COMSCORE report.  B&N might not even care because they have said their Nook Tablet is less a tablet and more an e-reader.