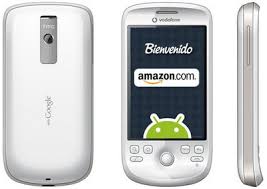 There are swirling rumors that Amazon is working on two different things, its own dedicated app store and an Android driven Tablet PC.

Tipsters right across the border in Seattle Washington and popular website Techcrunch has offered up a bevy of information about the new Amazon Android Service. First of all, it’s Amazon’s own store that will be viable in its own right, but will not compete directly with the Google Android Market Place.

With the success of the partnerships Amazon has established with big name companies such as EA by making dedicated paid Kindle Applications, they are laying the ground work for their own store that could be employed with any Google Android Smartphone or Tablet PC.

There have been plenty of details leaked on the logistics side of things, such as the establishment of a mostly paid system. Amazon will pay developers similarly to authors, where developers would make 70% of each sale of the application. Amazon will regulate developer applications internally and release a SDK similar to the iOS fee of $99 in order to make applications. Amazon will then review the applications and if you might their criteria, they will publish you in their store. You can also submit free applications, so you are not limited to fully paid apps. Many people will likely make both the Lite and Full paid application.

One of the aspects that Amazon will carry over to their new development space is that as an application designer. The developers app will come with DRM, which means only devices that have been sanctioned by Amazon will likely be able to instal it properly. No word yet on the devices list.

The Applications will be available on Amazon.com as well as their own Android market place, and it is USA based only, similar to other programs Amazon employs such as their Beta Program for paid blog services available on the Kindle.

On Amazon’s Terms and Conditions of the new application store they are drafting up, they mention; “We have sole discretion to determine all features and operations of this program and to set the retail price and other terms on which we sell Apps.”

The second major tip is that Amazon is developing a Tablet PC driven by Google Android OS, and will be a direct competitor to the Apple iPad as a consumer device. Amazon in the last year has been acquiring many different hardware development companies, such as Touchco, a company that makes screens and have made deals that allow them to scoop up full color capacitive multi-touch screens.

We will continue to follow this story as it develops.