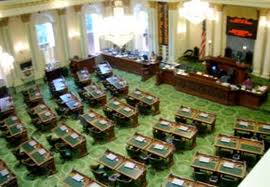 As more and more state governments around the U.S. begin to see Amazon.com as a potential cash cow to solve the budget-balancing woes brought on by a recent recession and irresponsible spending, the online retailer has been putting out the financial fires by quietly dissolving its affiliates programs in those states. In one case with Texas, Amazon chose to be more proactive and offered to work with the state government, creating a new distribution center and bringing more than 4,000 jobs to the state.

To date, Amazon has ended its affiliates program in seven states, although it later amended its partnership with websites in Texas. Ten other states, including California (who recently passed a law that would require Amazon to collect sales tax for online orders placed from that state), have Amazon in their sights. At this point in time, Amazon collects sales tax on orders from five states, in which it has either corporate offices or distribution centers.

Now, Amazon is fighting back against what it arguably feels is a personal attack. Due to the passing of the law in California, which was purported to bring in around $317 million annually in sales taxes, Amazon cancelled its affiliates program in that state and cut over $200 million of revenue generated through its more than 10,000 small-business partners.

Instead of quietly severing ties as it has done with the other states whose governments have initiated a tax like this one, Amazon has filed a petition with the California attorney general’s office to ask the voters to repeal the law. This application will require over 430,000 voter signatures to make the ballot, but hopefully the effects of cancelling the affiliates program have generated enough outrage that the citizens will take a stand with Amazon against what it feels is a punitive violation of current sales tax legislation.