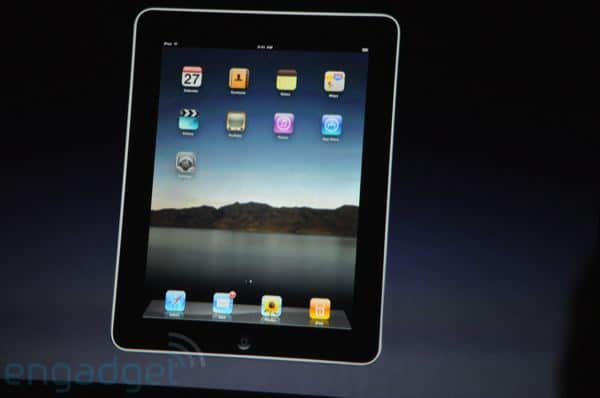 Apple has sold its 250th million IPOD they announced today during their product launch. It claims the new IPAD is more intimate then a phone or laptop. The Dataplan for the I-pad for 250 MB of Data is 14.99. The Unlimited plan for the I-Pad is 29.99. I-Pad is partnering with At&T to give free WI-FI access to the Hotspot. You can activate the Plans directly on the I-PAD you do not have to call a phone number. This is available in the US. All of the I-Pads are unlocked out of the box, so they can work with most carriers without any special codes. International data plans will be available in June 2010. The cost of the I-Pad will start at 499.99. The 3G model costs extra $130. I-Pads will be shipping everywhere in 60 days. The 3G models will be shipping in 90 Days.
The I-Pad comes with free accesseries such as a docking station that makes it look like a picture frame. It also comes with a case to protect it.

Typing on the I-PAD is a dream to type on, it displays photos and does slideshows as well as showing a top of the line calender. It also does live satellite apps and GPS.
It has 2 modes, landscape and portriot mode. It is fully touchscreen.
It surfs the internet using the Safari web browser. When you check your email it can display allot of different formats such as PDF. When you use Email you can actually see the attachments within the email, it fits to form so you do not have to exit the email to see an attachment. It fully displays within the email itself.

For music it has a built in IPOD. You can browse for music and see something that you like, and just tap on it and load it up.

In addition to music and videos you can listen to Podcasts via Itunes. You can watch movies in HD with a custom YOUTUBE application.

The Applications store has been running for a few years and has downloaded over 64 million apps. They built the IPAD to run ALL store applications right out of the box. You can run the applications in full screen as well.

For games such as first person shooters there is another new innovation, drawing a targetting box around enemies and firing on them simultaneously. They have made games for consoles and iPhone, but building for iPad is totally different. It’s like holding a high-def TV screen just inches from your face. Looking at live game experience with data from last April. Can navigate through games, pitch-tracker, shows trajectory of every pitch thrown from the perspective of the baseball player.
For Application developers Developers are gonna want to do the same thing. They have enhanced the iPhone SDK to support iPad development. Devs can go to Apple.com today to get it and get going. SDK even includes iPad simulator.

The New York times claims the I-PAD is like holding a news paper in your hands. The IPAD is not just a great computer device but it acts as a Ereader. They compare the new I-PAD to the Amazonas Kindle. Amazon has done a great job of pioneering this, but. we’re going to stand on their shoulders and go step further. Apple has made a new application called ibook. The new Book store, fully integrated with the iBooks application. Five of the largest publishers in the world involved with iBooks. using this application you can get access to top charts, new york times, bestsellers. You can even preview the book before you buy it. Book downloads to your bookshelf (looks like a real bookshelf) where you can select it and read it.

To turn pages you can tap pages, or drag them if you want, there are actual page animations. You can view books in Black and white or color, there can be video if the publisher wants. You can also can change font size to read, you can change the font itself.
There is also a new Application called iWork. iWork is a suite of apps that millions of customers on the Mac truly love. customers at home, schools, business, are able to create professional quality presentations, word processing docs, spreadsheets. There is a Completely new version of Keynoate designed specifically for the iPad.
Using iwork you can create great looking slideshows and presentations. You can also create lush animations into charts and spreadsheets. You can rotate photos by using your fingers, can mask images within Keynote… You can turn it horizontal and get a bigger keyboard if you want. You can view many spreadsheets in Numbers at once with tabs along the top.

For artists . “artists of all skill levels can produce countless paintings with their fingertips” This app is exactly the same on the iPad as it is on the iPhone, pretty much, except that it’s great to use a bigger screen.
For Itunes, iPad syncs over USB with iTunes running on your Mac or PC, exactly like an iPhone or iPod touch.
Every I-PAD has wireless WI-FI with 3G.