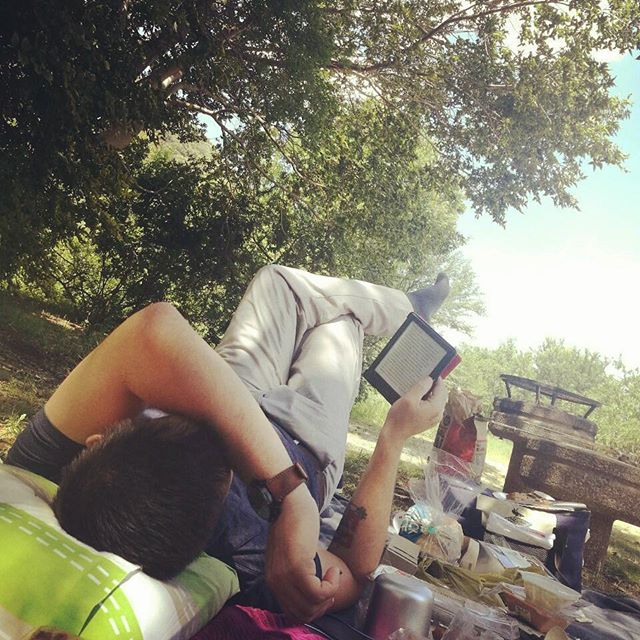 Earth Day is this Saturday and many people will likely be reading a new e-book on their Kindle to promote reduced emissions. E-Readers in general are thought to be environmentally friendly, but this is not necessary the case.  It is all a matter of how much you read.

Paper and e-readers both have different kinds of pollution and waste that are quite different. With readers, the main pollutant is the manufacture of the battery and the screen. Manufacturing rechargeable batteries and computer components has a very large impact.

The production and use of paper has a number of adverse effects on the environment which are known collectively as paper pollution. Pulp mills contribute to air, water and land pollution. Discarded paper is a major component of many landfill sites, accounting for about 35% of municipal solid waste.Even paper recycling can be a source of pollution due to the sludge produced during de-inking. The manufacture and distribution of paper production, in books, both are decidedly ungreen.

e-Readers require complex batteries and screens as the bulk of their carbon footprint. In order to develop them companies need to engage in the mining of nonrenewable minerals, like columbite-tantalite, which sometimes come from politically unstable regions such as the Congo. And experts can’t seem to agree on whether we’re at risk of exhausting the world’s supply of lithium, the lifeblood of the e-reader’s battery.

Emma Ritch recently conducted a story on the carbon footprint of a Kindle e-Reader vs paperback books. “There is roughly 168 kg of CO2 produced throughout the Kindle’s lifecycle and 1,074 kg of CO2 if you purchase three books a month for four years; and up to 26,098 kg of CO2 when used to the fullest capacity of the Kindle DX. Less-frequent readers attracted by decreasing prices still can break even at 22.5 books over the life of the device,” she wrote in conclusion.

The Cleantech Group argues that the electronic reader industry can make a significant impact once people start transitioning from paper media en masse: “A user that purchasers fewer than 22.5 books per year would take longer to neutralize the emissions resulting from the e-reader, and even longer to help reduce emissions attributed to the publishing industry,” according to the study.

Nick Moran of The Millions had interesting prospective, mentioning “The emissions and e-waste for e-Readers could be stretched even further if I went down the resource rabbit hole to factor in: electricity needed at the Amazon and Apple data centers; communication infrastructure needed to transmit digital files across vast distances; the incessant need to recharge or replace the batteries of eReaders; the resources needed to recycle a digital device (compared to how easy it is to pulp or recycle a book); the packaging and physical mailing of digital devices; the need to replace a device when it breaks (instead of replacing a book when it’s lost); the fact that every reader of eBooks requires his or her own eReading device (whereas print books can be loaned out as needed from a library); the fact that most digital devices are manufactured abroad and therefore transported across oceans.

The Book vs e-Reader argument really centers around the co2 emissions and production involved in the entire process. One facet most people don’t consider is water. The newspaper and book publishing industries together consume 153 billion gallons of water annually, according to the nonprofit Green Press Initiative. It takes about seven gallons to produce the average printed book, while e-publishing companies can create a digital book with less than two cups of water.

So in conclusion if an e-reader owner reads fewer than 50 books on their e-reader it would have had a lighter impact on the environment. Once you break the 50 book threshold, you are getting your Captain Planet Badge.