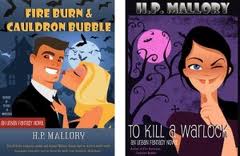 Author HP Mallory, the bestselling writer who has penned such titles as Fire Burn & Cauldron Bubble and Toil and Trouble, as well as her Dulcie O’Neil series, had one thing going for her career that a lot of indie authors don’t have, namely, experience in online promotion. Mallory’s background as an online marketing consultant more than prepared her for the sometimes stagnant waters of self-promotion. That experience proved invaluable as she was able to sell more than 225,000 copies of her ebooks, causing some of the Big Six publishing houses to take notice.

“After writing my first book I went online to some writers forums to find out about the process of getting it published,” says Mallory in an interview with GoodEReader.com “I was pleasantly surprised when I got a lot of requests for partials and fulls, then signed with my dream agent. She sent it out to everyone, but we found that publishers weren’t going for the humor in the paranormal stories that I write. After some time I ended up splitting with my agent and almost gave up writing.”

Fortunately, it wasn’t too long after that before Mallory read an article on digital publishing and began considering self-publishing, discovering that more and more well-respected writers were turning to ebook publishing even in experimental increments. After uploading some of her titles to Kindle and to Nook through Barnes&Noble’s PubIt! platform, she was pleasantly surprised by the response from readers in terms of ebook sales.

“I eventually quit my job and started writing full time,” continues Mallory. “Then I got an email from someone at Random House who had seen my books online and read some, and wanted to work out a print deal. I had already been thinking about trying to get an agent again, and I signed with Kimberly Whalen of Trident Media Group to handle the contract aspect of being a writer.

“I chose to go with Random House because I felt like I could only get so far in the ebook world. I’d like to know that readers who prefer print can also find my books in stores, so having a foothold in both aspects of the industry means a lot. And with my background in online marketing, Random House’s people have been very willing to listen to me in terms of ideas for getting my books out. Getting to do this full time has been a fantastic, life-altering process.”

While Mallory’s first series has been picked up by Random House, she will continue to write and self-publish the Dulcie O’Neil series, whose next title, Great Hexpectations, will launch on October 31st. The first two books in the series, To Kill A Warlock and A Tale of Two Goblins, are available on Kindle and Nook.