You are here: Home / e-Reader News / Baen Goes to Amazon! 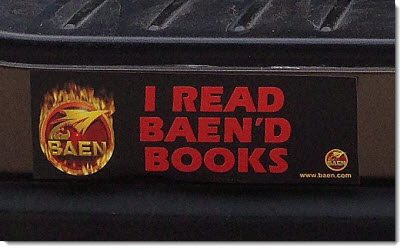 Big changes at Baen Books, and probably much for the better. Baen was founded in 1983 by Jim Baen and Simon & Schuster, where it became one of the major publishers in the science fiction field and an industry leader in innovation. Baen was one of the pioneers in electronic publishing, starting with a BBS and then with a website and chat room. The company then adopted ebooks, making it one of the earliest proponents of the medium. I remember downloading them and reading them on my iPaq Windows Mobile Pocket PC. All Baen books were, and still are, DRM-free. In another first, Baen started Webscriptions, which were serialized versions of its books at reduced prices, which were sold 3 months in advance of print publications. Baen again was a pioneer when it introduced promotional CD-ROMs, which could be purchased or downloaded for free, containing all of an author’s works. If you can think of an innovative way to distribute ebooks, Baen probably did it first.

Of course, using this model, Baen’s audience for ebooks was a bit limited. That is, you had to be a bit of a techie to get the books. They were not generally available through the main distribution media and most people who bought a Kindle, for example, would have no idea how to download a book from the company if they even knew about it in the first place.

Now, Baen will sell its books through Amazon on December 15. The books still will be DRM-free and the prices will be slightly higher. In addition, authors’ royalties will be increased by 25%. Baen is negotiating with other distribution channels, so it will not be an “Amazon exclusive.”  Toni Weisskopf, Publisher said (in the company forum Baen’s Bar) that “We felt that at this time access to expanded markets outweighed the cons. It does mean that prices for out individual ebooks will be going up to meet the rest of the market (but, yes, all titles will be DRM free).”

This is great new for Baen, its authors, and the public. Baen will get a wider distribution and the authors a higher royalty. It will, however, increase prices to readers and cut out some of the distribution methods previously used, such as the Webscription system. On the whole, however, it is encouraging to see a pioneer, who was always outside the mainstream, joining up with the rest of the industry and bringing ebooks to wider and wider audience. It is also wonderful to see that Baen’s books continue to be DRM-free.