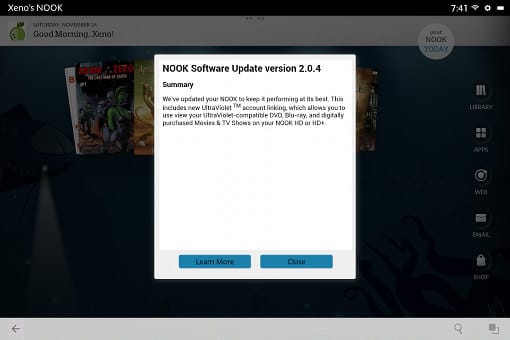 When the Nook HD and HD+ were released last month, one of the things that fell under the radar was a feature called Ultraviolet. This service allows customers to shop for DVD and Blu-ray Discs with the Ultraviolet logo and watch the digital version on their tablet. The company has just introduced support for this via the settings menu to sync purchases to the B&N Cloud.

UltraViolet is a rather new company that helps build bridges between the retail video market and the digital editions. It has established relationships with Universal, Paramount, and Sony Pictures. The essence of the service is when you buy the tangible copy via Walmart, B&N, or Flixter, the digital version can be accessed via your UltraViolet account.

Barnes and Noble introduced support last week for integration of Ultra Violet in the Nook HD and HD+. This will allow customers to have access to all the movies they have purchased from these studios with the little logo on the box. Instead of renting or buying movies directly from B&N, you can easily watch all of your purchased content. This is handy if you buy lots of kids movies and you want to hog the television to watch the latest episode of the Walking Dead. You can toss the kiddies the Nook Tablet and they can watch their movie for the 100th time.

Speaking of kids, Barnes and Noble has added more content to its own TV and Movie Store. You can get access to new titles, such as Brave, Toy Story 3, Cars 2, Dr. Seuss’ The Lorax, Dora the Explorer, and iCarly, along with holiday favorites like Elf, A Christmas Story, The Santa Clause, and Arthur Christmas. Also available: The Amazing Spider-Man, The Avengers, Harry Potter and the Order of the Phoenix, Prometheus, The Girl With the Dragon Tattoo, 21 Jump Street, Game of Thrones, Entourage, The Sopranos, and many more!