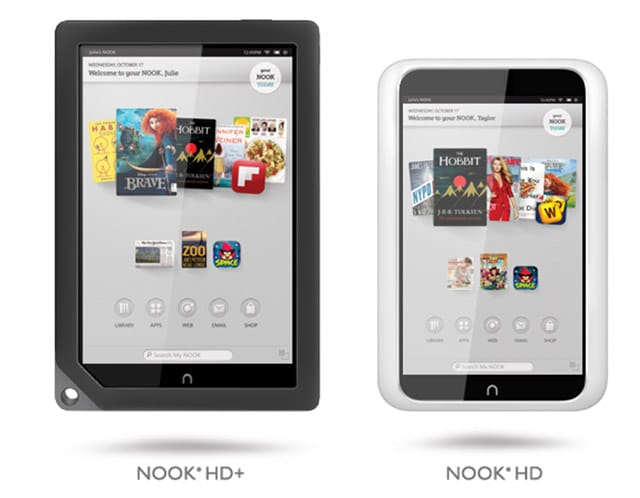 Barnes and Noble has put out a memo today that announced the Nook HD and HD+ tablets are now available online. If you order today, you should be able to ensure that they are delivered around November 15th.

The Nook Tablet HD features a seven inch high-res display and will have a mighty resolution of 1440 x 900 pixels and 243 pixels per inch.Video playback will allow you to watch videos in 720p. The pixels are really punched into this model, 25 percent more per square inch than the Kindle Fire HD. Underneath the hood will be a 1.3GHz high-speed processor and 1GB of RAM.

The new NOOK HD+ will feature a 9-inch display with resolution of 1920 x 1280 and 256 pixels per inch for up to 1080p for movies, magazines, and more. The fully laminated display reduces glare and provides excellent viewing angles, perfect for personal or shared viewing. This amazing display rivals the new Apple iPad, but is 20%  lighter and nearly half the price. Underneath the hood is a 1.5GHz dual-core processor with 1GB of RAM. It will also have a mini HDMI port that will allow you to stream media directly to your television.

There is a ton of excitement surrounding the new Nook tablets. They pack far more resolution than most other 7 inch devices and destroy the iPad Mini as a dedicated e-reading device. They are also fairly affordable with the entry level model of the HD costing a paltry $199.99. You can order them online via the Barnes and Noble website if you live in the USA, and if you live in other countries you can get them from Shop e-Readers.