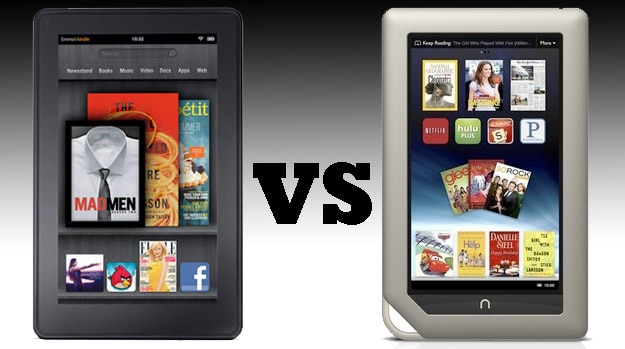 The Amazon Kindle Fire and Nook Tablet both hit the streets yesterday and reviews have been pouring in. Most people seem satisfied with both devices, but which one is the MUST buy for the holiday season?

The Kindle Fire is billed as a multimedia device that happens to read books. It is seven inches in size and taps into the vast Amazon ecosystem. It lacks a camera and 3G internet access, but most people seem happy with the $199 price tag. The hyping factors are Amazon Prime, which gives you streaming video and once a month free ebooks to borrow. There is is a large App market for downloading tons of content. Amazon just launched their newsstand that allows you to get magazines and newspapers. The company also has one of the most developed book ecosystems in the world.

The Nook Tablet is the followup to the widely successful Nook Color. It maintains the same form-factor, but has a more recent version of Android. It is lighter and easier to carry around and also is no slouch in the ecosystem. The hyping factors with the Nook Tablet are the multi-year advantage on kids books, textbooks, color content, and magazines/newspapers. While Amazon is just getting into this, Barnes and Noble has been leading the charge for two years.

Inevitably, most media based companies are trying to drum up comparisons of both these devices against the Apple iPad. Really, there is no contest. The iPad reigns supreme, but the $499 minimum price tag makes it hard for people to invest in the unit.

So which device is better for you? There are a number of facets to consider based on where you live. If you reside outside of the USA, the Kindle Fire ecosystem is not compatible with non-US markets. The App Store, Prime, and videos are USA based only and will not work unless you use a VPN. The Nook Tablet allows you to use almost everything if during registration you “mention” a USA based address. It does not do any IP checks for content based on your actual location. If you ask me, I would say the Amazon Kindle Fire might be best if you like more media based activities and don’t mind being locked into one ecosystem. The Nook Tablet is best if you want more magazines, kids books, and color based content. The big question is what will you use the devices for?

Stay tuned for our hands on reviews of both of these new devices on Thursday.