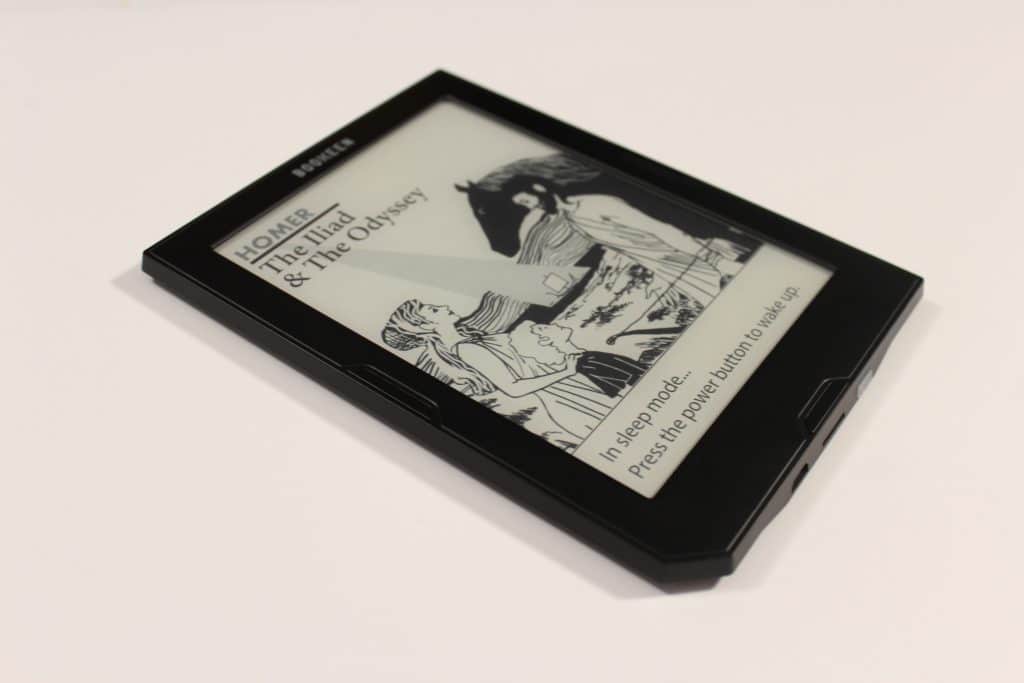 Bookeen has an excellent entry level e-reader called the Cybook Muse Light. It has a front-lit display and access to a French digital bookstore with over 300,000 titles. You can sideload in all of your favorite titles you purchased from other retailers with full support for Adobe Digital Editions. 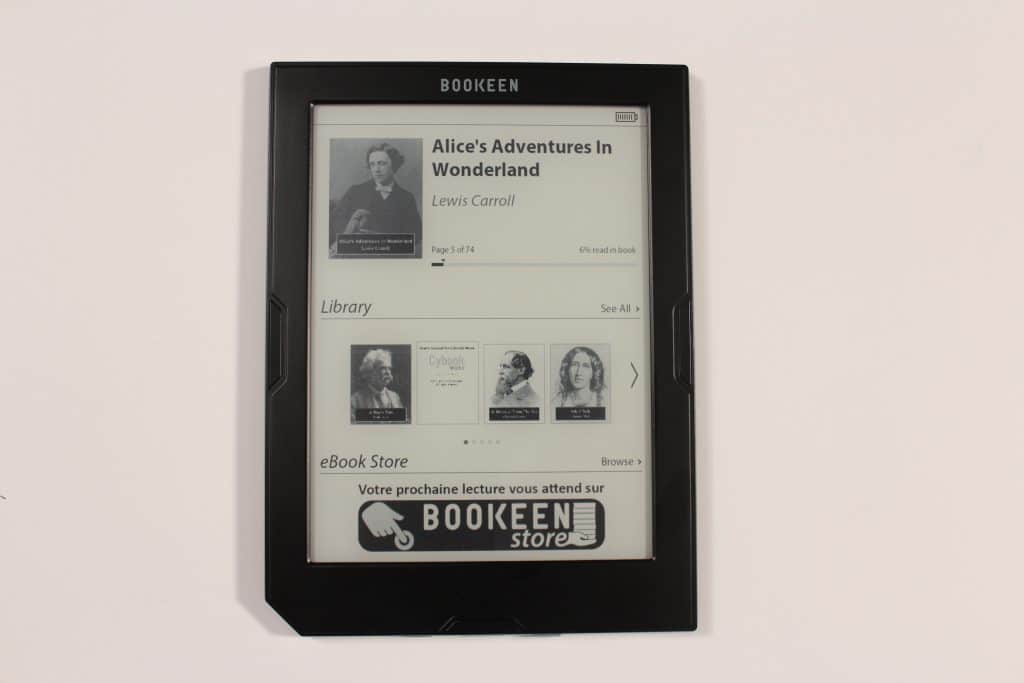 The Cybook Muse with Light features a six inch E Ink Carta capacitive touchscreen display with a resolution of 800×600 and 167 PPI. Surprisingly it does an excellent job with providing text with clarity, even though the resolution is substandard compared to many other devices that are 1440×1080, such as the Kindle Voyage.  Most entry level e-readers use an IR based display and the touchscreen is not every intuitive.

Underneath the hood is a Cortex A8 1GHz  processor, 512MB of RAM and 4GB of internal storage. There is an SD card slot to further expand it up to 32GB. It has a 1900mAh battery and it should last you around three weeks with WIFI turned off or around four weeks in standby mode. Speaking of standby, there are screensavers!

There are manual page turn buttons on the left and right hand side. You can invert them and flip around the orientation if you are left handed. I really dig e-readers with buttons, it makes it easier to hold in one hand and read, instead of always having to make finger gestures on the touchscreen.

The front-lit screen has some pale blue hues to it and is not as vibrantly white as the Muse HD or the Kindle Paperwhite. If you have never owned any of these e-readers before and buy the Muse Light, I don’t think you will be let down. The light is evenly distributed across the screen, which makes reading at night viable. When you are reading an e-book you can initiate dark mode, which makes the background black and the text white. This makes it easier to read at night, when in bed with your partner.

The operating system is Linux and there is an internet browser, but there are no games or other distractions. This is an e-reader and it does its singular purpose very well.

The main UI has three different elements to it. The home screen has the book are in the process of reading at the top and lists what page you are on the percentage read. There is a carousel underneath that which lists all of the books that are in your library. You can use the touchscreen to navigate or the physical page turn buttons. At the bottom is an image that brings you to the Bookeen Bookstore. If you tap on the home button you bring up some quick options, that allow you to open the library, bookstore or settings menu.

Once you find the font type and size that you want, reading is a joy on the Muse Light. Page turns are quick and robust, thanks to the E-Ink Carta screen. Note taking, highlights and annotations are way different on this device than the Cybook Muse HD.  Instead of holding down on a specific word or highlighting a body of text you are brought to a standalone menu, in which the contents of the book disappear.  You go through a series of menus and submenus to look a word up in the dictionary. I would not not recommend this e-reader to someone who needs dictionary functionality or regularly makes notes, it simply is not intuitive enough.

What I like most about the e-reading experience is that Bookeen loads some really good fonts on it. There are a ton of e-reader companies out that just load stock Android fonts and hope that will be enough, it normally isn’t. Bookeen has the Amazon crafted font Caecilia and popular ones like DejuVu Sans/Serif and Minion Pro. 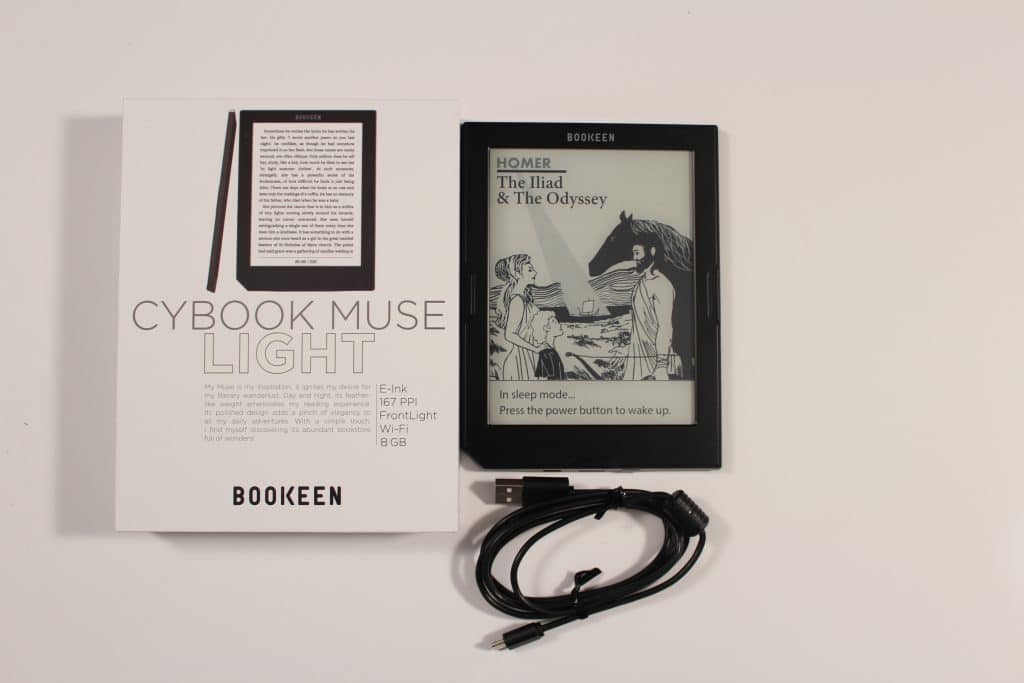 The Muse Light is a great little e-reader. It costs 89,90 € from the Bookeen store, which is affordable. In Canada French is a national language and the second most popular one. There are thousands of kids in French immersion programs outside of Quebec and millions all over the world. Amazon and Kobo have a paltry collection of French titles if you live outside of France, which makes purchasing content difficult. Bookeen’s bookstore exclusively stocks French ebooks and they have over 300,000 free and ones written by bestselling authors. You can buy and download free samples anywhere in the world, since the store is not geographically restricted in anyway.

The hardware looks polished and manual page turn keys are appealing towards people who like this sort of thing. The battery might be a bit on the small side, compared to most other e-readers on the market, but this one is not running Android, so it really doesn’t need it.