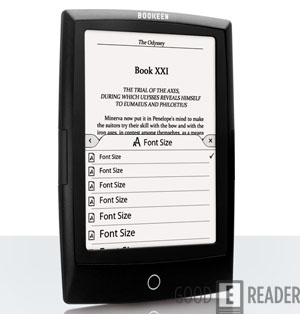 Bookeen is going to officially announce the price and launch date of the highly anticipated Cybook Odyssey e-reader on Monday. This new device will feature a six inch e-ink pearl display that is fully touchscreen. It will be running on a 800 MHZ Cortex A8 processor, adding to the enhanced speed of the device.  The core new element to this e-reader is HSIS technology.

Bookeen has been testing for the last year a new breed of e-ink in conjunction with Texas Instruments. So what does this bring in the table in terms of end user performance? They are bringing record battery life, faster page turns, and is the first e-paper reader to provide rolling menus and a scrolling web browser.

I am fairly excited about this device and the company demonstrated some great new features like low frame rate video playing on e-ink and the best internet browser in the business. Stay tuned for Monday when we will announce the release date and price for the Cybook Odyssey.