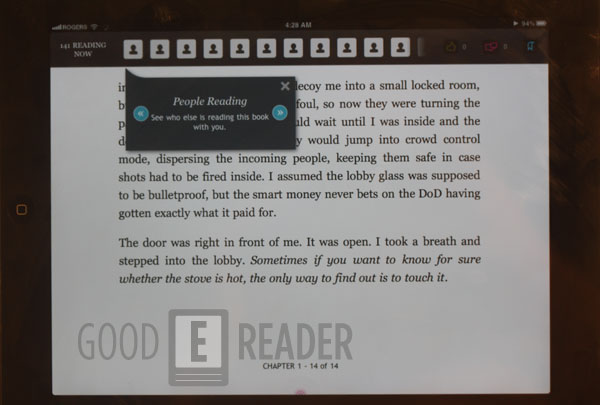 Kobo has just rolled out its new update to its popular iOS application for the Apple iPad! The big new feature dropping in version 5.0 is Kobo Pulse! This is one of the new social aspects found in the new Kobo Vox eReader that allows users to chat with each other and interact.

Kobo Pulse was first unveiled during the Facebook developer conference last month and has finally reached the prime time. Kobo Pulse is useable with any books you have downloaded or purchased from the Kobo bookstore. As a book grows in popularity the size of a little blue pulse at the bottom of your book grows. When you click on the pulse button, you are greeted by a number of interesting features. You can see how many people are reading the same book as you are and leave comments to discuss the book. This functions similarly to a modern mini chat-room.

Kobo has just upgraded its iOS iPad application to sync your annotations across many different platforms. All of your notes and highlights are now saved in the cloud.

Finally, there is a new bookmark cloud syncing feature. Let’s say you are reading a book on your Kobo Touch and leave a bookmark on page 34. When you open up the same book on your iPad, it automatically picks up where you left off.