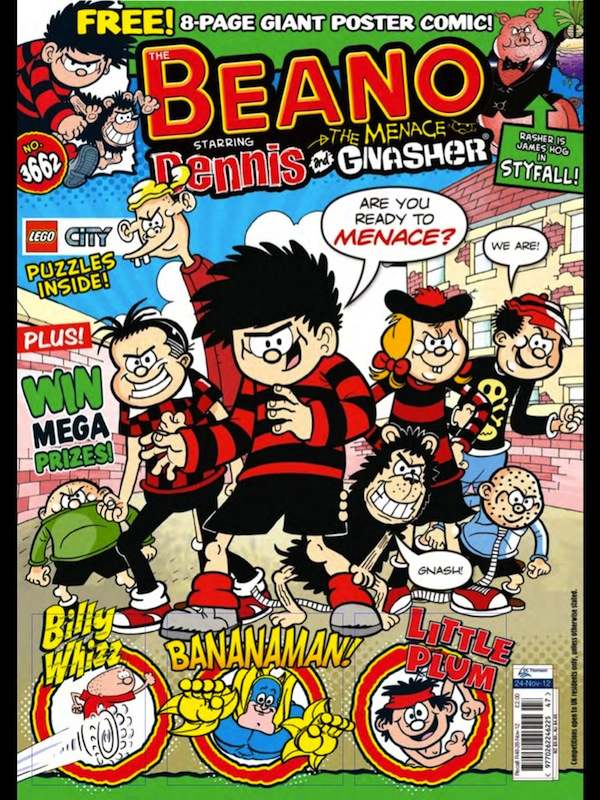 When I was a kid, I loved British comics, but I couldn’t get them very often. I lived in Scotland the year I was five, and I spent occasional summers in Ireland, but aside from those glorious periods of my life, I depended on my Irish relatives to send us comics a couple of times a year. They would arrive in huge cylindrical bundles, rolled and wrapped in brown paper, tied with string and covered with exotic stamps. Flattening out the comics to read them was as much a part of the experience as trying to figure out the more obscure slang references.

Many of the titles I grew up reading in the 1960s and 1970s are gone now, but the good news is that the UK comics scene is more vibrant than ever, and more and more comics are turning up on tablets. Here’s a quick survey of the landscape.

To most Americans, the iconic British comic is 2000AD, the home of Judge Dredd. The 2000AD Newsstand app for the iPad is pretty basic; you can subscribe or buy individual issues, and that’s it. The comics store is straightforward, with a simple grid of comics for sale—no “Featured” section or fancy stuff like that. There aren’t even any previews; clicking on a cover brings you straight to a purchase confirmation. The app has the edge over comics shops in both timing and price, as single issues cost $5.95 in the U.S., as opposed to $2.99 on the app, and appear in the app on the day they are published in the UK, which seems to be about two weeks ahead of their arrival in U.S. comics shops. Hard-core 2000AD fans should probably just plump for the subscription: You’re spending your money in bigger gulps ($10.99 for one month, $29.99 for three, $109.99 for a year), but the comics are cheaper that way, and they throw in a bundle of back issues for free. The only bit of whimsy in this app is the fact that it’s hosted by Tharg, the space alien who is the real editor of 2000AD. There are a couple of good freebie, as well: a 69-page sampler comic with first chapters of a number of 2000AD stories and a Judge Dredd movie prequel.

The Beano and The Dandy are two weekly children’s comics that have been around since the 1930s, and the announcement earlier this year that The Dandy would be going digital-only caused a huge uproar in the UK. Both comics rely on zany characters and plenty of slapstick, and The Dandy in particular has brought in a new cohort of cartoonists in recent years whose humor is smart and up to date. So I’d start there, because the price is right at 99 cents per issue, which is a good deal for over 30 pages of comics. You’ll be getting the comics a bit late—the current issue on the app is November 17—but since the stories are all self-contained, that’s not a big deal. One issue of The Dandy is pretty much like another. The humor is juvenile and often gross (the main characters in one strip, “The Bogies,” are anthropomorphized boogers), so a certain type of kid will probably love it. Alas, the app (which is a bit old) hasn’t been updated for the new retina display of the iPad, so the comic appears a bit fuzzy, but that’s not likely to be a huge issue for an eight-year-old on the prowl for fart jokes.

The Beano is sort of the older brother of The Dandy, a bit older and more staid. Many of the comics look about the same as when I was a kid, and you won’t find as many fart jokes. It’s still a good comic, though, with a roster of mischievous characters who dedicate a lot of energy to causing trouble. It’s also a good deal. Although older issues cost $1.99, the publisher seems to have dropped the price to 99 cents per issue in mid-August, right around the time the news came out about The Dandy.

In terms of functionality, both apps are very straightforward, with no bells and whistles. Each features a storefront for in-app purchases of single issues, as well as a subscription option. The subscriptions are oddly expensive: $4.99 a month, $21.99 for six months, or $42.99 for a year. Given the minimal savings—it’s actually more expensive to subscribe for one month than to buy the single issues—and the uncertain future of The Dandy right now, I’d hold off on that. The comics download quickly and the reader is easy to use. A double-tap zooms in on the page, which can be moved around by dragging on the screen. An upward swipe reveals thumbnail views of all the comics and a slider that allows the reader to move from location to location. That’s it! It’s good enough, though, and each comic delivers plenty of juvenile humor for less than a dollar.

Unlike the other comics apps mentioned so far, Strip Magazine doesn’t use in-app buying; each issue is a separate app. At $2.99 for 60+ pages of comics, the price is a steal. Strip Magazine is an attempt to recapture the glory days of British adventure comics; most of the stories are new, with the exception of “Hook Jaw,” a classic 1970s comic about a killer shark, which has been cleaned up and relettered for modern readers. Each issue contains a chapter each of five or six different adventure serials, and the quality of both the comics and the reproduction is quite good. The publisher does seem to be struggling a bit to bring out issues on time, but since they are sold as single apps, the only real risk is not getting to the end of a story. You can read issue #0 online to get an idea of the stories involved.

There’s more to come: Panel Nine recently announced that it will be serializing The Phoenix, a monthly children’s comic, for the iPad. So far, The Phoenix has only been available in print in a single supermarket chain in the UK, so I haven’t been able to read it yet, but by all accounts it is an extraordinarily good comic with a talented stable of creators. Stay tuned!