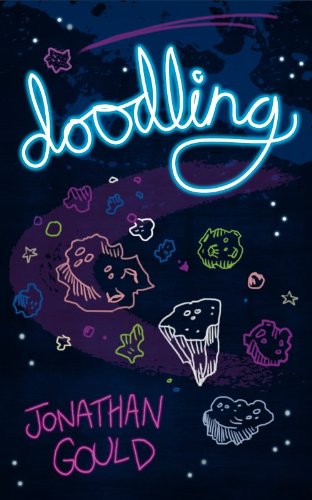 This week’s GoodEReader.com Ebook of the Week is Doodling, by Jonathan Gould. The Australian author refers to his preferred genre as “dag-lit,” a term possibly more familiar to fans Down Under, but one that easily translates into North American literary vernacular.

“Dag is Australian slang for someone who isn’t cool and doesn’t follow fashions or go with the crowd,” explained Gould in an interview with Goodereader.com . “I like to think that my books are a bit like that–they have their own distinct identity and don’t easily fit into the predefined boxes of genre, and they’re definitely not part of some kind of bigger trend (like vampire books). Also, a dag is usually seen as someone kind of funny and friendly and jovial, and I also think that fits my books.”

And with a title like Doodling, it’s no wonder that words like funny and jovial fit the bill. According to a very apt reviewer on Doodling’s Kindle store page, at first glance the book seems like a pleasantly silly story about a man flinging off the Earth’s surface quite by mistake as the planet’s rotation begins to spin out of control, forcing him to set up hearth on an asteroid. But once the reader looks deeper than the ludicrous surface, some very real struggles for survival will be revealed.

“Doodling is pretty much exactly what the title suggests. It’s me sitting at my computer and ‘doodling,’ but in a writing sense rather than a drawing sense. The idea actually came from a comment my wife made, that the world seemed to be moving so fast. From that, I got the idea of the world going so fast that somebody actually fell off it.

“Next day I was at the computer and writing a short piece on this subject. I liked it so much that I decided to come back to it a week later. And so it went on. Once a week I’d try to write another installment with no clear planning and no idea where it was going, but with some vague inspiration from the Alice in Wonderland stories. Each chapter was inspired by something different, whether it was something I read, something happening in current events, or just a random idea. The result was quite long and rambling, with some great bits and some not so great bits, and the first inkling of a plot to hold it together. Once I had a plot worked out, I went back and cut, trimmed, relocated and added until I had something that held together as a story while still having that odd, rambling sense about it.”

Both Doodling and Gould’s more recent work, Flidderbugs, can be found on a variety of ebook distribution sites, including Amazon, Barnes & Noble, iTunes, Sony, and Smashwords. Gould blogs at daglit.blogspot.com and can be followed on Twitter at @jonno_go. Gould is making available Flidderbugs to a few lucky readers who go to his blog and subscribe, remembering to leave their contact email in the comments section in order to receive their additional ebook.

To receive a free digital copy of Doodling, go to Smashwords.com and enter the coupon code at checkout: FS62E