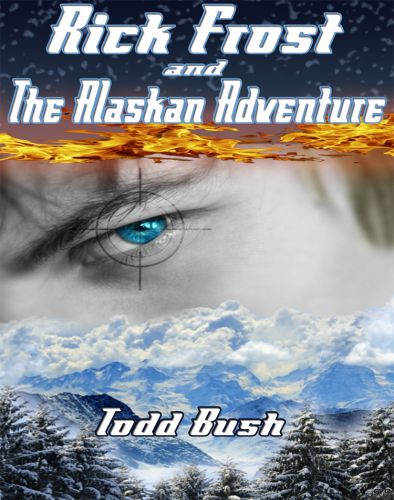 Middle grade and young adult author Todd Bush brings to life this week’s GoodEReader.com Ebook of the Week feature with his novel, Rick Frost and the Alaskan Adventure. This title is the first book in the Rick Frost series, an action-adventure line-up whose second title is already available and a third is currently in the works. While this title is decidedly for teenaged readers, the action behind the story give it crossover appeal for readers of all ages.

Bush is no stranger to the likes and dislikes of teenage literary audiences. As a public school administrator in a challenging high school setting, Bush was disappointed in the lack of male protagonists available in current mainstream fiction. Too often, YA titles aimed at male readers were either sci-fi/paranormal fantasy fiction, or featured protagonists that many readers failed to identify with since the publishing industry still views male readers as the stereotypical wimpy underdog. Bush’s protagonist, Rick Frost, is far from the obviously portrayed misunderstood gangly teenager, and actually relies on his physical strength and outgoing attitude to save not only himself but a Hollywood starlet whose plane crash over the isolated wilderness was anything but accidental.

“There’s absolutely not enough material for male readers,” says Bush in an interview with GoodEReader.com this week. “A lot of agents and publishers talk about the need for male-interest titles, but a lot of publishers aren’t producing a lot of books for male readers. Authors need to write about things that appeal to boys, and if boys don’t read it might be because there’s not a lot for them to read.

Interestingly, Bush first envisioned the character of Rick Frost as an adult who was thrown into harrowing situations, but as he began to write the book he realized that a full-grown man rescuing himself and others in a wilderness survival tale wasn’t really thrilling. However, a teenager having to step up and save the day really gave the tale a new life.

“The story was great, the action was good, but it was still missing something. I took another look at it and thought, ‘What would happen if this started earlier, when Rick was younger?’ It completely revolutionized the story. Any thirty-something man could possibly save someone’s life in the Alaskan wilderness, but what about a 14-year-old? That’s a little bit more exciting and leaves the reader wondering if this kid can pull it off. It made the story a lot more than what it was when it started.”

As this is GoodEReader.com’s first YA title featured on the Ebook of the Week, and given that many teens may not have access to their own e-reader specific devices, remember that the ebook can be downloaded to smartphones that are enabled with the free Kindle and Nook apps, as well as read on a tablet or laptop. The author is also giving away free ebook editions of the sequel to Rick Frost and the Alaskan Adventure to select commenters on this article.

Click here to claim your free ebook from Smashwords.com and enter the following code at checkout: CU24K