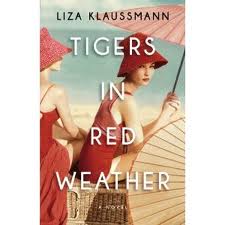 There is a part of you that, when reading Klaussmann’s upcoming novel, wants to believe that this is just another book about the lifestyles of the New England summer home set. And why not? Those old money families that work in the city but escape to their homes on the coast to rub shoulders with “their kind” have been portrayed in countless books that chronicle their playboy lifestyles. The momentary and literary escape from our own reality is refreshing.

But all throughout Tigers in Red Weather, there is an undercurrent of ugly, something dark that the reader can’t put his finger on until the very last page. The events that pepper the surface of the story with frivolity almost don’t seem real, as though any moment the surface will be scrubbed away and we will all see the blackness underneath.

Klaussmann’s novel follows two cousins—practically sisters, really—from the struggles of their early married days close to the end of World War II through the to the years when their children become adults with demented issues of their own. Placed nearly in the middle of the timeline is a gruesome murder that tears at the fabric of an idyllic summer, but the case isn’t solved for the reader until the end of the book due to Klaussmann’s careful doling out of information bite by bite.

Admittedly, the story was slow to start and somewhat confusing at first, with shocking incidents sprinkled among the pages. These events later served to make the revelations of the last chapters all the more interesting. It did feel as though the confusion was an intentional joke in which the reader wasn’t a part, but even that made me feel at the end as if I suddenly knew something that no one else did.

Tigers in Red Weather was released by Little, Brown this month and is available from Amazon, Barnes and Noble, and Kobo, among others.