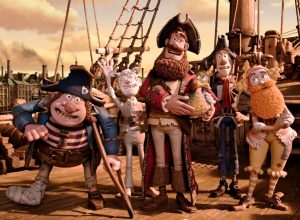 Always on the cutting edge of what’s new for children’s content, award-winning app book developer iStoryTime is giving away five promo codes for its latest title, The Pirates! Band of Misfits. This title is launching just ahead of the Sony Pictures Animation and Aardman film, due out April 27th.

“The Pirates! Band of Misfits follows the luxuriantly bearded Pirate Captain – a boundlessly enthusiastic, if somewhat less-than-successful, terror of the High Seas. With a rag-tag crew at his side, and seemingly blind to the impossible odds stacked against him, the Captain has one dream: to beat his bitter rivals Black Bellamy and Cutlass Liz to the much coveted “Pirate Of The Year Award. It’s a quest that takes the heroes from the shores of exotic Blood Island to the foggy streets of Victorian London. Along the way they battle a diabolical queen and team up with a haplessly smitten young scientist, but never lose sight of what a pirate loves best: adventure! The film is directed by Peter Lord and produced by Peter Lord, David Sproxton, and Julie Lockhart; the screenplay by Gideon Defoe, based upon his book The Pirates! In an Adventure with Scientists.”

iStoryTime creations are known for their engaging and entertaining bonus features that can be easily manipulated by young readers, and The Pirates! is no different. The Piratize Yourself feature takes advantage of the face tracking capabilities of iOS 5 to let youngsters become pirates in real time. Readers can also work to become “Pirate of the Year” themselves as they seek out hidden objects scattered throughout the pages.

The Pirates! Band of Misfits is available in the iTunes store, but five lucky GoodeReader fans will each win one promo code, courtesy of iStoryTime. Leave a valid email address in the comments section below to be entered in the drawing.