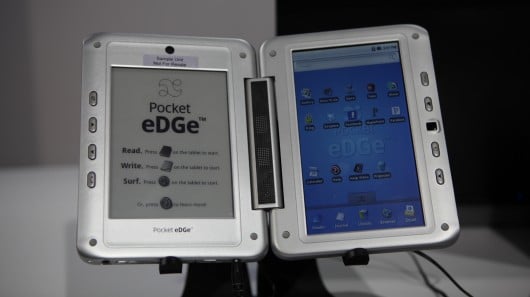 The new Entourage Pocket Edge might have already been available on pre-order at Amazon, though it’s only now that Entourage has made the scaled down Entourage Edge official. The price has been fixed at $399.99.

The Pocket Edge though does not break new grounds and is essentially much the same as its bigger and older sibling, the original Entourage Edge. The only few things that can be considered new in the Pocket Edge is its reduced size, along with a few tweaks here and there. For example, the integrated webcam has now been shifted to the left and has suffered a downgrade to 2 MP from the earlier 3 MP. The number of USB ports, as well as built-in microphone, have come down to 1 from the earlier 2 each. Also, it’s now a MicroSD card slot that the Pocket Edge comes with instead of the SD/MMC Card Slot of the earlier Edge.

However, for the Pocket Edge, the battery is no longer user replaceable as it used to be, while a new optical finger pad has come to take the place of the trackball of the earlier Edge. Apart from these, there is the expected reduction in weight that has come with the reduction in size, something that has made the device more pocket friendly.

These apart, the Pocket Edge continues to serve the same purpose – as an e-reader and a tablet that is targeted at students and aims to simplify such tasks such as research, education and browsing functionality, all in a convenient size and shape.