You are here: Home / Digital Publishing News / Fans Will Have to Wait a Little Longer for Harry Potter Ebooks 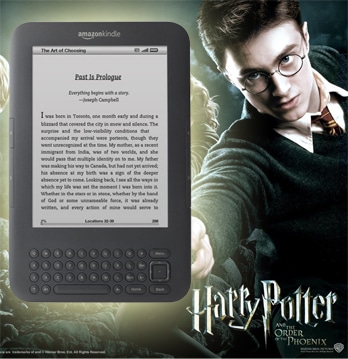 The Harry Potter books have been unreleased in ebook form—legal copies, anyway—but were slated to be released one at a time via the Pottermore.com website. Unfortunately, e-reader fans are now going to have to wait a little longer for access to those titles.

According to the Pottermore.com blog, Insider.Pottermore.com, the site crew has been so busy with the beta launch of the online wizarding world of Harry Potter that they are postponing the release of the books in the site’s online store. The site now plans a release of the first book in early 2012.

“There are now one million people with access to Pottermore and everyone who registered through The Magical Quill challenge can access the site.

The Beta is enabling us to learn a lot about how people want to use Pottermore – and to understand the features they enjoy the most.

Since the launch of the Beta, we’ve seen really high levels of activity, and interaction with the site has been phenomenal. This affects how quickly we can give everyone access. As a result, we’ve decided to extend the Beta period beyond September and take a different approach to the way new users are brought onto the site.

From the end of October, registration will be opened to everyone and we’ll be giving access to registered users in phases. Access may be granted quickly, but please note it could also take some weeks or months, depending on demand.

We are also making a number of enhancements and simplifications to Pottermore, in order to make the site smoother and more enjoyable – so existing Beta users will likely experience some changes when new users begin to join.

Finally, the Pottermore Shop, which will sell the Harry Potter eBooks and digital audio books, will now open in the first half of 2012, in order to allow us to focus on our first priority: opening Pottermore to as many people as possible and making the experience as good as it can be.”

It is interesting that the developers decided to test the beta program with one million users, staging an elaborate contest to select early-access users; many sites would be grateful to even have a million subscribers. And while the delay of the ebooks is disappointing, compliments must go to the developers for realizing that selling the digital editions and the audiobook counterparts before they have the time to focus on producing the best possible error-free conversions would be detrimental. This also indicates that the feedback from the beta launch has been plentiful and that the site has some issues to overcome before the full launch at the end of this month. Either way, whenever the ebooks and the site are ready for the public, they will be at their best.