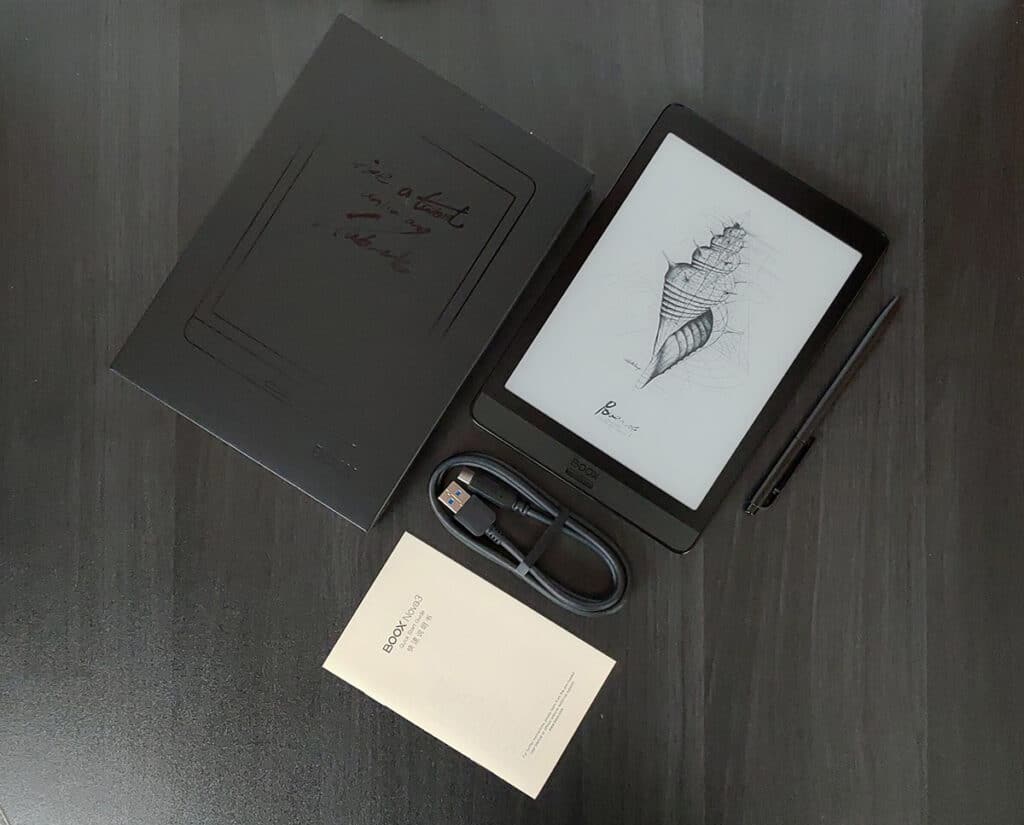 The Onyx Boox Nova 3 is designed to be an e-reader and e-note. It comes with a WACOM screen and a stylus to make notes, edit PDF files and annointate ebooks. This device is 33% faster than the Onyx Boox Nova 2, this is primarily due to the new processor and DDR4X RAM. The big selling points are Android 10, which provides better security for your device and also Google Play for all of your favorite paid and free apps.

The Onyx Boox Nova 3 has a 7.8 inch capacitive dual touch display with a resolution of 1872×1404 with 300 PPI. It has a front-lit display to read in the dark. There are 17 LED lights in total, 8 are amber LED lights. There is also a WACOM layer, for integrations with the accompanied stylus. The screen is flush with the bezel and it has a glass based display.

Underneath the hood is a Qualcomm Snapdragon 636 Octa core processor, 3GB of DDR4X RAM and 32GB of internal storage. It has a USB-C port with OTG and also has Quick Charge 4.0, so you can power it up to full in under an hour. Unlike the Nova 2, this has speakers and Bluetooth 5.0, instead of 4.1. There is a microphone, so you can take audio notes or talk to people in Zoom or Skype. It is powered by a 3150 mAh battery. The dimensions are 196mm, 137mm, 7.7mm and weighs 265g.

The retail packaging of the Nova 3 has an all black box. On the front is a embossed outline of the device, with piano black lettering. On the back of the box is a list of tech specs in around 12 different languages. There is also a number of certifications that Onyx has passed in order to have a global release.

When you open the box for the first time the e-reader is on the front, encased in a static proof bag, there is a small tassel that you can pull to easily remove it. There is also a free screen protector that comes with it. Opening up the bottom tray is the USB-C cable, a stylus and documentation. The design of the stylus is consistent with all of their other models, it has an eraser not the top and an eraser button on the side, where you normally hold it.

The overall color scheme of the Nova is black. It has a two tone bezel. Surrounding the bezel is piano black and on the bottom is a very dark grey, this is where the home button is. The back of the device is a one tone black, there is a single speaker. At the very top is a power button and status indicator light, on the bottom is a USB-C port and microphone port. The microphone is not only used for voice chat, but can also be used for voice to text in the note taking app.

The Onyx Boox Nova 3 currently retails for $339 from the Good e-Reader Store and comes with a free case and screen protector.