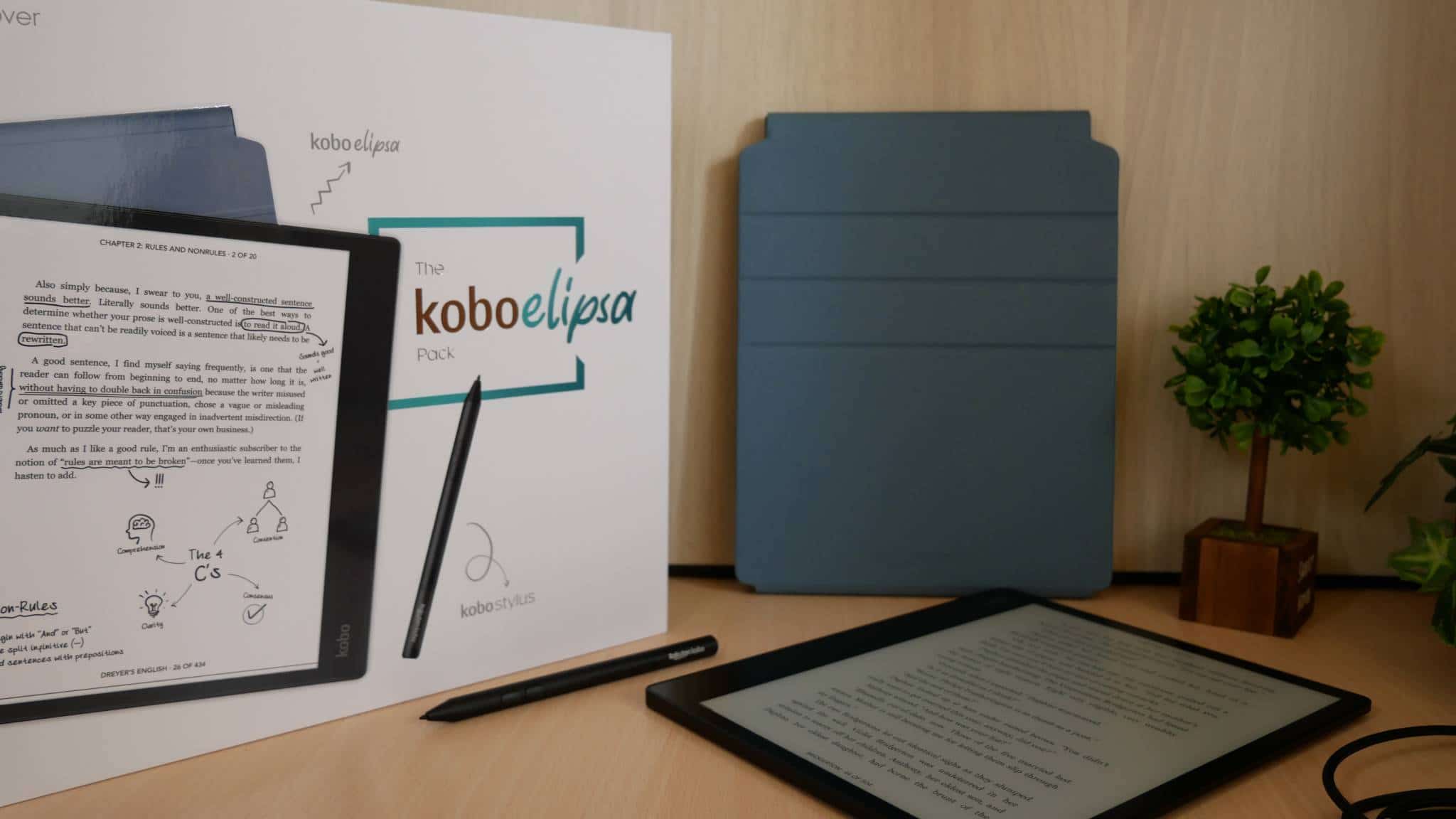 The Elipsa is the first professional digital note taking device that Kobo has ever produced. The company primarily focuses on consumer grade digital readers, but this new 10.3 inch device is a different beast entirely. The hardware is slick and polished and the UI is similar to other Kobo products, you can borrow ebooks via Overdrive and read Pocket articles.

The Kobo Elipsa features a 10.3 inch E INK Carta 1200 display, which is really new. It features a 20% faster response time and a contrast ratio improvement of 15% over Carta 1000. This screen tech was developed for e-notes in mind and reduces pen writing latency, giving a more responsive user interface, and enables animation. The resolution of the screen is 1404 by 1872 with 227 PPI. It has a front-lit display with white LED lights for lowlight environments and when it’s late, you can adjust brightness with Comfort Light to read and write at night or try out Dark Mode for white text on black. Easily adjust the brightness by sliding your finger along the left-hand side of the screen, for the perfect lighting in any setting. It does not have amber LED lights that provide a candlelight effect.

One of the most interesting things about this device is that they are not employing a WACOM screen, instead they are using a capacitive stylus that has pressure sensitivity, but it does not have 4,096 different levels, like other digital note taking devices use. This is similar screen technology has the Boyue Likebook P10.

Underneath the hood is a Quad Core 1.8 GHz processor, 1GB of RAM and 32GB of internal storage. This is the first Kobo product that has a USB-C port, which is used for transferring data to your device and also charging. You can use the Kobo internet browser to surf the web, sync your documents and notes to Dropbox via WIFI 802.11 ac/b/g/n. It is powered by a 2,400 mAh battery, which should give you a couple of weeks of usage, before having to recharge it.

The retail packaging of the Elipsa is actually very interesting, all of the imagery is in landscape mode, the vast majority of e-readers do it in portrait. It has a full color image of the e-note, along with the stylus and free cover you receive. The box is made of very thick cardstock and is the heaviest box we ever seen. It weighs 4.1 pounds or 1.9 KG. The retail packaging color scheme is white and the Kobo logo is embossed in Gold and the model is in light blue. On the back of the box is some of the key selling features, such as screen size, note taking, WIFI and the lighting system. 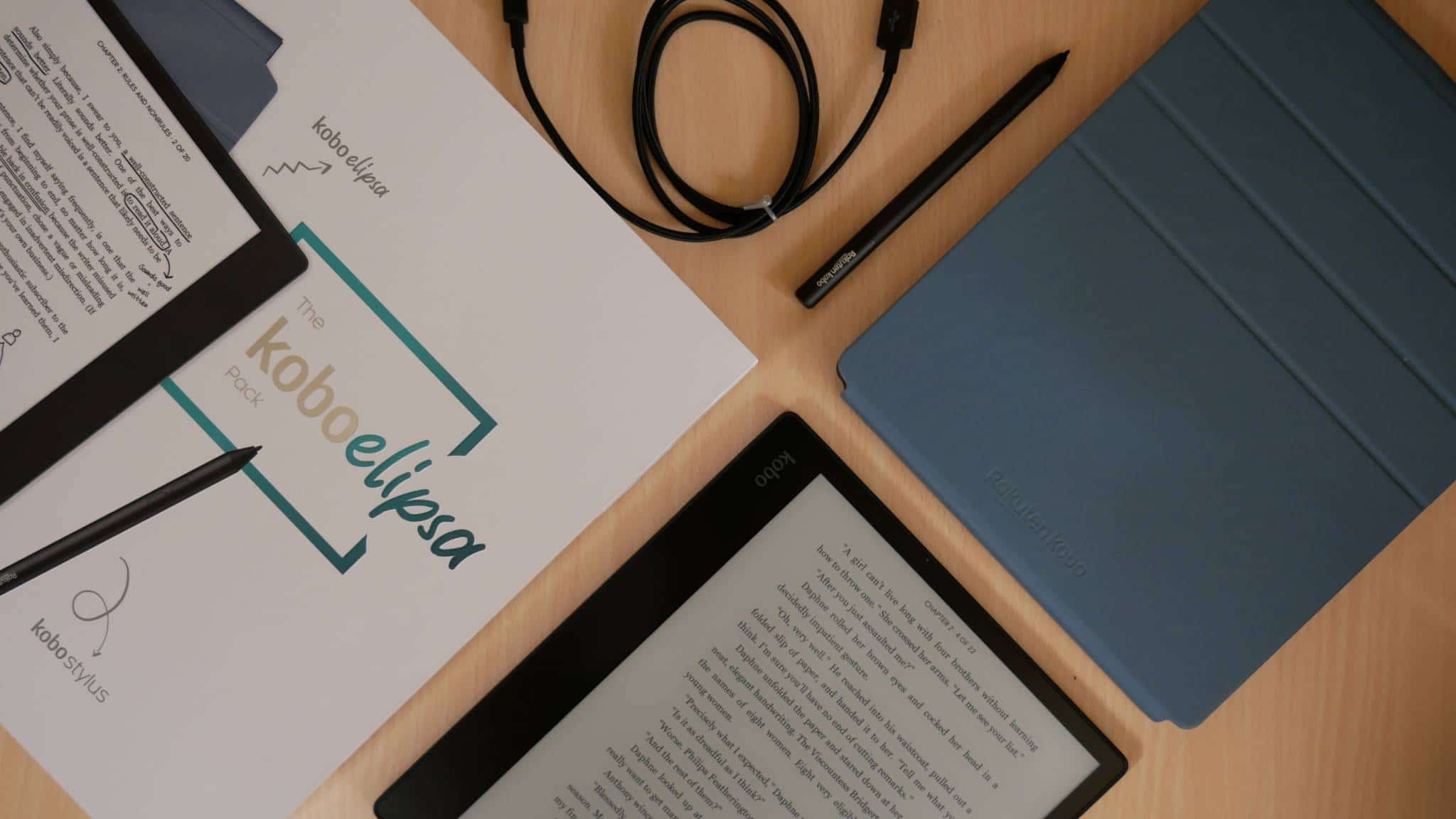 Opening up the box, the first thing you see is the Elipsa sleep cover case. It has a sky blue color scheme and it puts to sleep the device and wakes it up when it is opened. The case has some grooves, that allow you to prop up the device, for a hands off approach. There is also a one page guide that shows you all of the different ways you can use the case. The stylus has its own little box, which is designed well. It mainly has the same color scheme as the main retail box, except it just has a picture of the stylus on it. There is a quick start guide that primarily has pictures on how to use the stylus and also a written guide, in a myriad of different languages.

The Kobo stylus is made of a aluminum and inside the stylus is metal. There are two different buttons on the side, that do different things. If you read reading an ebook, the buttons can be used to conduct highlights. When freehand drawing, they can do different lines and shades. The stylus is capacitive and needs a single AAA battery to stay charged. I wish they just allowed you to charge it up with a USB port, similar to what Sony did with the Digital Paper. The battery gives the stylus an added heft. This stylus is proprietary, no other pens work with the Elipsa. We tried various WACOM and capacitive pens, and nothing worked.

The color scheme of the Kobo Elipsa is black and has an asymmetrical design. It is very thick on one side and tapers down to being thin on the other. This is because Kobo packed the battery and all of the big components on that side of the unit. It is similar to the design of the Kobo Forma, but on a larger scale. The back of the device is also black, but it actually has little feet, in the form of rubber. This is to ensure that if you plop it down on a desk, the back won’t get scratched easily. There is no home button on the front, but on the side, where the e-note is thickest is the USB-C port, status indicator and power button.

The Kobo Elipsa goes on sale on June 28th and will only be launched in Canada and the USA, with other markets to follow later in the year. You can pre-order it from the Kobo website and all other countries can pre-order it on the Good e-Reader Store.