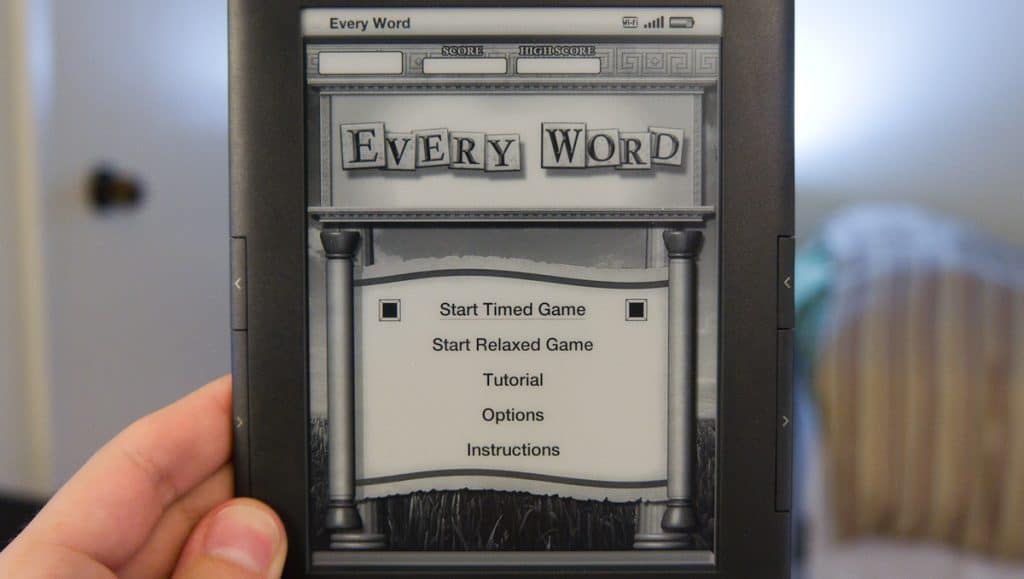 While the main purpose of e-readers is to allow users access to thousands of books from a single screen, they have often come with other features over the course of their history. In fact, some models have been made with built-in games to give readers something else to do in between devouring various fiction and non-fiction titles. Over their history, e-reader games have tended to be quite simplistic and have never really become a big selling point for customers. This could have been a missed opportunity, though, seeing as tablets are threatening to render traditional e-readers obsolete in the coming years. Could things have been different if e-readers had featured more content for gamers?

History of Games on E-Readers

Games have never been a major part of e-readers, but there have been some simplistic offerings included on the devices in the past. With the e-ink screen, the games couldn’t be too advanced. The reason that e-readers use e-ink is to represent a paper-type display, along with the fact that it doesn’t require much power to operate. The technology, which was founded by MIT graduates J.D Albert and Barrett Comiskey, is lauded for its high visibility and contrast, but it couldn’t be used for games with too many moving parts.

There were some games which were ideally suited to the e-reader platform, however. These included things that you would find in newspapers, such as crossword and Sudoku puzzles. Sudoku has become increasingly popular over the last decade, and the game which originated in France in the 19th century is a great brain training exercise which also helps kill some time.

E-ink was able to run some simple card games, which are good choices for keeping the brain sharp. There are various need to calculate their probability of winning and decide when to hit or stand, and the ability to play online frequently allows players to develop their skills. Word searches were another feature of e-readers, and in these games, players simply had to find words in a grid of letters and circle them. The common theme in all of these games is that they require the player to use some thought. Because e-readers are educational in that users have access to endless sources of knowledge, it is appropriate that the games on the platform offer some food for thought as well.

E-ink was able to run some simple card games, which are good choices for keeping the brain sharp. There are various online casino games like blackjack, which are not only popular for their straightforwardness, and convince of play, but it takes skill to win. Players need to calculate their probability of winning and decide when to hit or stand, and the ability to play online frequently allows players to develop their skills. Word searches were another feature of e-readers, and in these games, players simply had to find words in a grid of letters and circle them. The common theme in all of these games is that they require the player to use some thought. Because e-readers are educational in that users have access to endless sources of knowledge, it is appropriate that the games on the platform offer some food for thought as well.

Barnes & Noble e-readers also used to feature some games. The Nook 1st Edition ran games like chess and Sudoku after the 1.3 software update in April of 2010. However, more recent offerings such as the Nook Glowlight didn’t have any games on them, and some reviewers thought this was a step backwards.

Kindle Active Content is a fancy term Amazon uses to describe the games and apps designed to run on Kindle e-readers. In 2010 Amazon introduced a section of their Kindle Store for games such as Chess, Hangman, and Jewels. It was designed to give people different things to do, other than reading books and newspapers on their e-readers. The problem was that Amazon never really promoted it and many users did not even know this platform existed. Amazon discontinued the service with the advent of the  Kindle Voyage and Basic Touch. If you have order Kindle models, you can still access the apps, but nothing new has been added since 2012.

Many e-reader developers seem to think that the devices should be solely for reading, but this may be detrimental to the survival of the platform.

Many of the most popular e-reading brands have eliminated games, but in the past few years companies such as Boyue, Onyx, Icarus and Good e-Reader have been developing E Ink based devices that have Android, instead of Linux. They have fully functional app markets such as Google Play, 1Mobile or APKPURE and give users the ability to download casual games such as Chess, Words with Friends or card games like poker or solitaire.  Games or hit or miss on Android, most require complex animations that fail to perform well on a digital reader, so experimentation is needed.

Many people like to play casual games on their e-readers when they aren’t reading and Android devices provide a ton of flexible versatility.

Are Games on E-Readers a Missed Opportunity?

With e-reader features now available on tablets, devices with the sole purpose of being a platform to read books may be on the way out. Users are more likely to go for the piece of technology that allows them to do everything from the same place, rather than buy an e-reader along with a tablet. For this reason, games on e-readers could have been a missed opportunity. If more advanced games had been made available for the platform, it could have helped boost their attraction. According to research from Statista, e-reader sales are rapidly in decline. The platform peaked in 2012, when 40 million units were shipped worldwide. Since then, sales have reduced drastically each year with 20.2 million units shipped just three years later in 2015.

In the same timeframe as the e-reader decline, tablets have been on the rise. In quarter 4 of 2012 there were 34.8 million units shipped, while in Quarter 4 of 2015 that figure was 66.2 million units. The correlation between the rise of tablets and the fall of e-readers suggests that a lot of users were switching platforms for the one which served multiple purposes.

One of the biggest selling points for tablets is the fact that users are able to play games on them. Over the years, the mass popularity of certain apps has underlined this. Games like Candy Crush and Pokémon Go, for example, have been global sensations and have made the companies that developed them a lot of money. The puzzle game from King has been downloaded nearly 3 billion times, while the monster collecting offering from Niantic has been played by more than 800 million people. The popularity of games like this is what draws people to buying tablets, but if e-readers had been able to offer something similar then players may have gone for that platform instead.

The fact that Amazon decided to change their approach with the Kindle Fire, which is a tablet rather than just an e-reader, shows that the massive e-commerce company saw that a platform with multiple uses would fare better. Users can play a multitude of games on the more advanced product, as well as reading books like they did on the previous Kindle e-readers.

Games on e-readers certainly are a missed opportunity. Remember, when e-Readers first started to gain popularity, tablets did not even exist yet and phones were not smart. If game and app developers started to create basic games and if Amazon, B&N and Kobo had a rudimentary app market, the tablet and smartphone landscape could have played out differently.