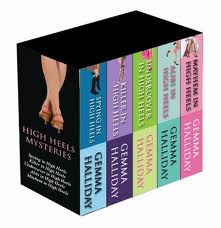 For Gemma Halliday, author of the In High Heels series of contemporary romantic mysteries, her writing career has been both highly successful and gratifying. Unfortunately, the publishing industry is just that: an industry. When she chose to part ways amicably with her publisher, Dorchester, when the traditional imprint explored some different directions, Halliday had the foresight to request the rights to her backlist titles, a move that spelled a renewed life for the previously published books.

All of Halliday’s books in the series, beginning with her 2005 release Spying in High Heels, but with the spike in popularity of e-readers fans began clamoring for digital access to the series. Halliday decided they had to be available as ebooks somehow. As luck would have it, the re-acquisition of the rights to her books came along almost at exactly the same time that Barnes & Noble launched its digital self-publishing platform PubIt! Since that launch in October 2010, Halliday has been hard at work on more titles to indie publish.

“I have since put two full-length novels and a few short stories on PubIt! that have not been in print previously,” says Halliday of her titles that are only found on e-reader. “I’m still traditionally publishing other new titles through HarperCollins/Harper Teen and St. Martin’s Press, so it’s almost like I’m straddling both worlds. I’ve only had positive responses from the traditional publishers that I’m with when they learn that I am also self-publishing other titles. It wasn’t like jumping from one world to the other, it was more like a great relationship between both publishing models. My publishers are actually looking at my self-published numbers and working on some crossover publicity, so this has been a great relationship.”

Halliday described the usual scenarios that cause authors—even bestselling traditionally published authors—to consider indie publishing, such as control over the work; one key aspect that really appeals to the mystery writer is the freedom from outside deadlines that are necessary in the publishing industry. Moreover, Halliday’s work with PubIt! has been such a rewarding experience that she’s revisiting In High Heels with a new title in the series, Fearless in High Heels, slated to be released solely to ebook in December.

“Spying in High Heels was the first book I had ever published and sold, so the fact that it’s getting a fresh life to a new group of readers through ereaders is really exciting to me. This is series was great, but my editor and I had decided to end it on a high note after five books. But now it’s getting such a new life through PubIt! and I’m getting so much more exposure than it did when it was strictly print, so now I’m writing a new book in the series. I’ve missed those characters and it’s like visiting old friends to get to see them again. I plan on just self-publishing it right now, and I might consider a self-publishing print edition for fans who love physical books, but I think I’ll keep that new one strictly indie.”