You are here: Home / Digital Publishing News / Good e-Reader Recognized by Freescale as the Top 4th Tech Blog in the World 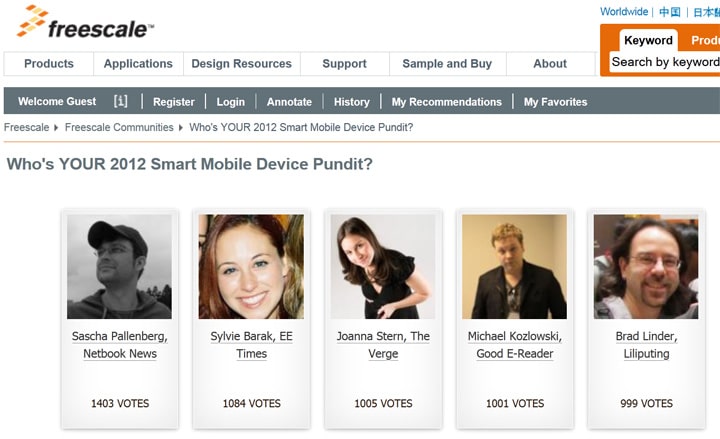 Freescale ran their yearly Top Tech Pundit of 2012 and we are pleased to announce that Good e-Reader officially placed 4th! This is a huge achievement for our tech blog and a testament to the great writing staff we have here that pumps out comprehensive digital publishing, e-reading, and ebook news on a daily basis.

Once a year Freescale runs their Top 5 Tech Pundits of the year and this year was no different. Initially, they had hundreds of blogs in the running and we were shortlisted to the Top 20, due to overwhelming support from our readers. During the last week, they took 20 of the most voted blogs in the world, including Cnet, ZDNET, Engadget, PC World, and the New York Times. I am humbled to say that due to our readers’ support we edged out all of those companies and made it into the coveted Top 5. I can honestly say I am blown away that an indie news source like ours managed to persevere against companies with outlandish operating budgets.

This past week has been huge for us with the story we broke about an Amazon launching a retail store. Major news organizations such as Thomson Reuters,  Fastcompany, Bloomberg, and many more all picked up on our articles and mentioned our blog in their publications. We conducted interviews with many companies, including the Financial Times and Sky in the UK about this piece and were honored that many industry veterans are regular readers of ours.

I want to extend my personal thanks to everyone who voted for us for this contest. We would not be where we are today without the great support! Our Twitter and Facebook accounts were upgraded recently and we experienced overwhelming positive feedback on it!