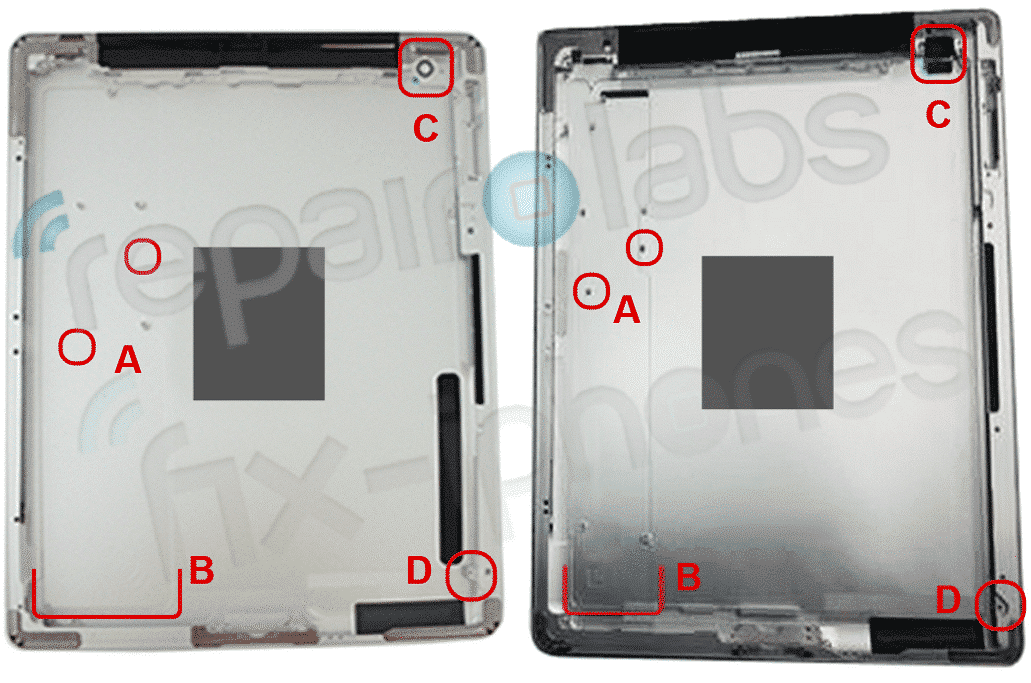 The upcoming iPad 3 has been the subject of much speculation, pointing towards a larger battery pack, a better camera, and a new design LCD screen. This guesswork has been based on the back panel that is supposed to adorn the rear of the future tablet.

A careful examination of the new back panel has revealed the mounts to be considerably different from the existing back of the iPad 2. This points out to the possibility of the logic board having been redesigned and of the latest generation. Rumors have been doing the rounds for a while now about the iPad 3 being provided with a larger battery pack, and the size of the back panel validates that. It provides more space to store a larger sized battery.

The camera appears to have been relocated in the iPad 3, as well. A different display, possibly the high resolution (2048 x 1536) Retina display, also seems very likely from the fact that the mounting of the LCD has been modified in the new back panel. It has been suggested before that the new iPad 3 would be thicker than the present version by 1mm to take in the extra panel depth as well as the higher powered battery.

Meanwhile, fresh speculations point out the iPad 3 may be powered by a dual core processor with a higher clock speed. The CPU will have a high powered graphics processor at its disposal with far greater capability to ensure the new Apple tablet is not found wanting. This will allow the iPad 3 to have a higher battery back up time without sacrificing performance. This refutes earlier rumors of the iPad 3 to be powered by a quad core A6 chip.

Interestingly, Samsung is also pursuing a dual core strategy for its upcoming tablet venture. Samsung is expected to unveil its new gen tablets powered by a 2 Ghz Exynos 5250 CPU. In contrast, Asus has adopted the quad core NVIDIA Tegra 3 chip for the latest Transformer Prime and has already impressed with its blazing performance on the one hand and industry leading battery life on the other.

Apple is all set to unveil its latest gen iPad 3 next month while Samsung will get to renew its tablet rivalry with the California based company a bit later.

Update: Sources with All Things D are claiming Apple is set to host an event on the first week of March to launch the iPad 3. No specific dates are available as yet, though March isn’t too far off, either.

via the verge, via fix-iphones