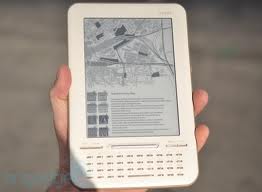 Google, a long-standing proponent of widespread ebook distribution, is no longer content to sit on the sidelines of digital reading and is partnering with iRiver to release an e-reader device that works directly with the Google eBookstore. This device will be the first to allow users to purchase ebooks directly from the Google Bookstore and load them straight to e-reader rather than to a smartphone or tablet, taking advantage of Google eBookstore’s catalog of over three million free downloadable titles and hundreds of thousands of for-purchase titles.

The iriver Story HD is an ePub-compatible device, so in theory users will also be able to enjoy the full benefits of ebook lending from their local libraries, something that Kindle users are still waiting for and hope will happen in the near future thanks to OverDrive’s recent announcement.

“The Story HD is a new milestone for us, as iRiver becomes the first manufacturer to launch an e-reader integrated with Google eBooks. You can learn more about the Story HD on the iriver website,” according to the official announcement today on Google’s blog.

The device will have wi-fi for downloads but no 3G capability, something that helps its price point compete with the Kindle and Nook, as iRiver Story will be available from in-store and online retailers on July 17th at a price of $139.99 US. This e-reader is compatible with cloud-based storage so that users can pick up where they left off when viewing titles on the device and moving to smartphone or computer.

Google has long maintained that it is simply in the business of broadening the reach of ebooks and doesn’t hold much interest in hardware production, but this venture with iriver is certainly a step in that direction. Whether Google eventually plans to release its own branded device remains to be seen.