You are here: Home / e-Reader News / Hands on Review of the Pocketbook 360 Plus 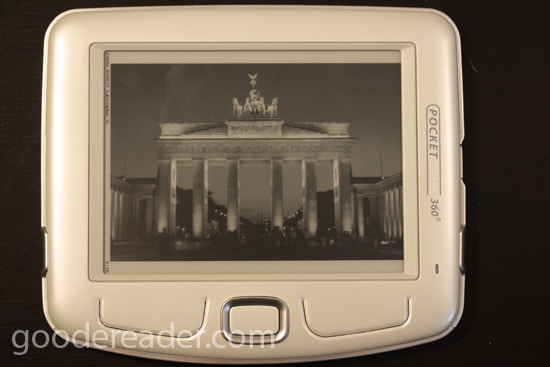 The Pocketbook 360 Plus is the latest generation e-reader issued by a company well known for its diversity of ebook supported formats. It just hit the retail market and we give you a very comprehensive hands on review.

The Pocketbook 360 Plus features a 5 inch Vizplex eink display with an impressive resolution of 800×600 pixels. Its backbone is a 533 MHZ Samsung Processor and it has 128 MB of RAM. The storage is quite modest at 2 GB to store your media, but of course you can further enhance this up to 32 GB via the MicroSD.

One of the most highly advertised features on this device is its ability to access the internet via the integrated WIFI. This will allow feature firmware updates to be “pushed” right to your Pocketbook. The ability to use the internet is something the direct competition (Jetbook Mini) is incapable of doing.

One of the drawbacks of the WIFI internet access is the inability for the e-reader to recgonize hyphones, slashes, and other common characters found in secure WIFI networks. The only way we got the internet to work was to make it OPEN.

The Pocketbook 360 Plus has a Mini USB port for syncing it up with your computer and transferring media to the device. This port is also used to charge your device because it lacks a DC port.

You interact with the Pocketbook 360 Plus mainly with the 3 main buttons built into the chassis. The center button, which is your ENTER button, is surrounded by a clickable D-PAD that allows you navigate around the various menus. The top and bottom buttons are mainly used for turning pages forward or back when reading ebooks.

The Pocketbook 360 Plus runs on a custom Linux interface and contributes towards an elegant and simplistic design.

The main settings menu is comprised of various options such as Books, Pictures, News, Notes, Dictionary, Settings, Applications, and Calender.

The News Application is basically a simple RSS feed application that lets you add in feeds from various internet websites. The Dictionary is very basic but helps you easily look words up using the dedicated application. The dictionary also has intergration to automatically look up words when you are reading books.

There are some various applications on the device such as a web browser, calculator, and various games. Mysteriously the Doom Demo that surfaced on the internet to hype up the device is nowhere to be found.

The Web browsing experience is one of the main draws of the device and is hampered by the software driven keyboard. When you type in a single character the positioning of the keyboard defaults to the center. So if you type the letter A, instead of the letter being highlighted it defaults back to the letter G. You will have to exercise some degree of patience if you are reguarly browsing the internet and typing in search terms.

We found from our internet experience that the device does not really handle javascript or CSS very well. Most webpages lost all of their formatting and were messes of text and graphics. In retrospect, it is an e-reader and not a dedicated internet device, so we can make exceptions.

Reading eBooks on the Pocketbook 360 Plus is great! The text is very crisp and is easily magnified if the default font is too small. You can also change the font in the settings menu if the default font is not to your liking. The main draw of all Pocketbook e-readers is their ability to read so many ebook formats and the Plus is no exception. It will easily read B2, FB2, TXT, PDF, RTF, HTML, PRC, CHM, DJVU, DOC, EPUB, and TCR.

There is no audio player or headphone jack on the unit so you will not be able to listen to music or audiobooks.

Our impression of the 360 Plus

Pocketbook has the amazing ability to continually innovate and release new products and have them do well. Pocketbook and Ectaco have a fair bit in common as companies that support a high degree of localization for alternative languages to English. Where most e-readers cater exclusively to the English market, Pocketbook makes its e-readers very accessible in many different languages.

The Pocketbook 360 Plus feels like a solid device, it is lightweight and easily transportable. The stick on screen protector is both artistically relevant and does provide screen protection when you are on the go.

This is by far not a high-end device, it feels mainly like a basic entry level e-reader. It has all of the main elements to make it successful in 2011 such as a WIFI, web-browser, and games.

What I really like about Pocketbook as a company is that it is perfect for people who download their own eBooks and do a lot of Calibre maintenance. It also reads a ton of eBook formats and currently the company leads the industry in its ability to display so many different types of eBooks.

It is on sale now for $149 via the Pocketbook Website, get yours today!