You are here: Home / e-Reader News / Handwriting Support Now a Reality on the Kindle Touch 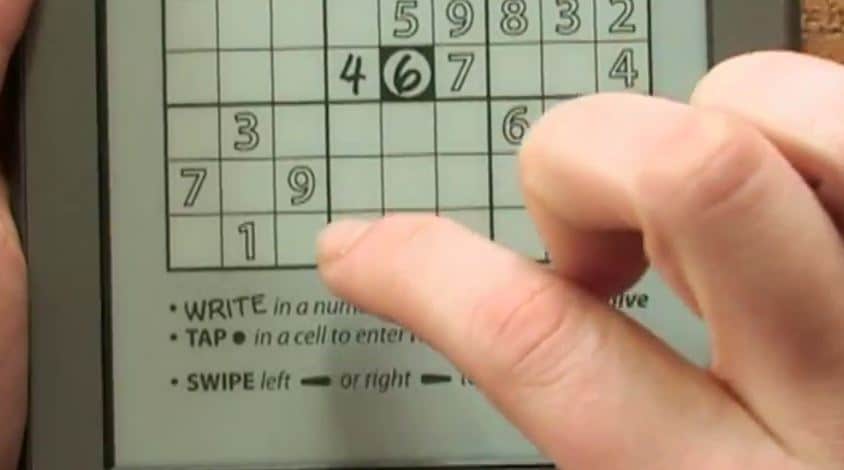 The Kindle Touch from Amazon is one of the best e-readers that your hard earned money can buy right now which in turn is aided largely by its extremely affordable price tag of just $99. However, that’s not to undermine the core abilities of the Kindle Touch as an e-book reading device which boasts of an E Ink display and touch input along with a commendable battery life. In all, the Kindle Touch is a superb e-reading device though the Seattle based startup called Puzzazz clearly had other ideas — that the Kindle could be put to use for more entertaining stuff rather than just reading e-books.

The game developer’s claim to fame is a new technology named TouchWrite which endows the Kindle with the ability to recognize handwriting. What this means is that one can now write text or numerals by drawing with finger directly on the screen instead of having to rely on a virtual on-screen keypad to do so. Like one can play Sudoku with the finger tips on the Kindle.

Now this isn’t the first time we have come across something of this sort before as handwriting technology isn’t anything new for tablet devices though that’s very much true for an e-reader. The Kindle Touch is the first e-reader to feature the handwriting recognition technology while Sodoku Unbound Volume 3 is the first game to have been based on the technology. The e-book contains 100 Sudoku puzzles and can be procured from the Amazon store for just $2.99. However, while the game is also compatible with the Kindle 4, its only the Kindle Touch where one will be able to make good use of the handwriting recognition feature.

Puzzazz founder and CTO Roy Leban stated: “We think what we’re doing here is the future of books,” though he didn’t mention Puzzazz will license the technology for use in the next iteration of the Kindle Touch.

Interactive e-books are what the future of digital books will be like and the new handwriting recognition technology from Puzzazz has already made a start on this. It will be interesting to see how what the future has in store on this.