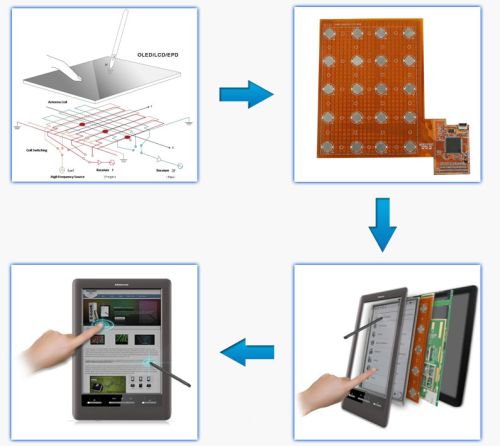 Havon the leading Chinese company best known for its popular line of e-Readers has just unveiled at SID (Society for Information Display) a brand new technology! It is called ERT Touch and the essence of the new technology is a new method of touch screen tech that is flexible, highly accurate, low cost and outperforms captive, resistive touchscreens. For the first time Hanvon is offering this ERT Technology to commercial manufacturers in the USA and globally.

One of the most exciting aspects of this new screen displays is that it combines ERT (electromagnetic resonance technology) and traditional touchscreen displays. It cuts down on false touches via a stylus and allows a dual input for interaction. It uses less power then comparable technologies and offers suprior precision  and a more natural handwriting experience. Think of the Asus EEE NOTE, but on a completely new level.

OK to sum up this new technology it gives you a crisper low powered alternative to capacitive and resistive touch screen tablets and e-readers. It really allows you to rest your hand on the screen without accidentally messing up what you are doing. It also gives you a high degree of sensitivity for interacting with your device via a stylus. It will be interesting to see what products Hanvon unleashes to showcase the new technology.

The Hanvon Dual-Touch ERT Technology combines the functionality of touch with the accuracy and convenience of an electromagnetic resonance technology (ERT) stylus, which shuts down “false” touches when in use. Hanvon brings the two technologies together, while allowing dual-touch input. Hanvon’s new technology meets consumer demand for finger touch displays while also lowering the cost to eReader manufacturers by adding a series of antenna sensors to the sensor board