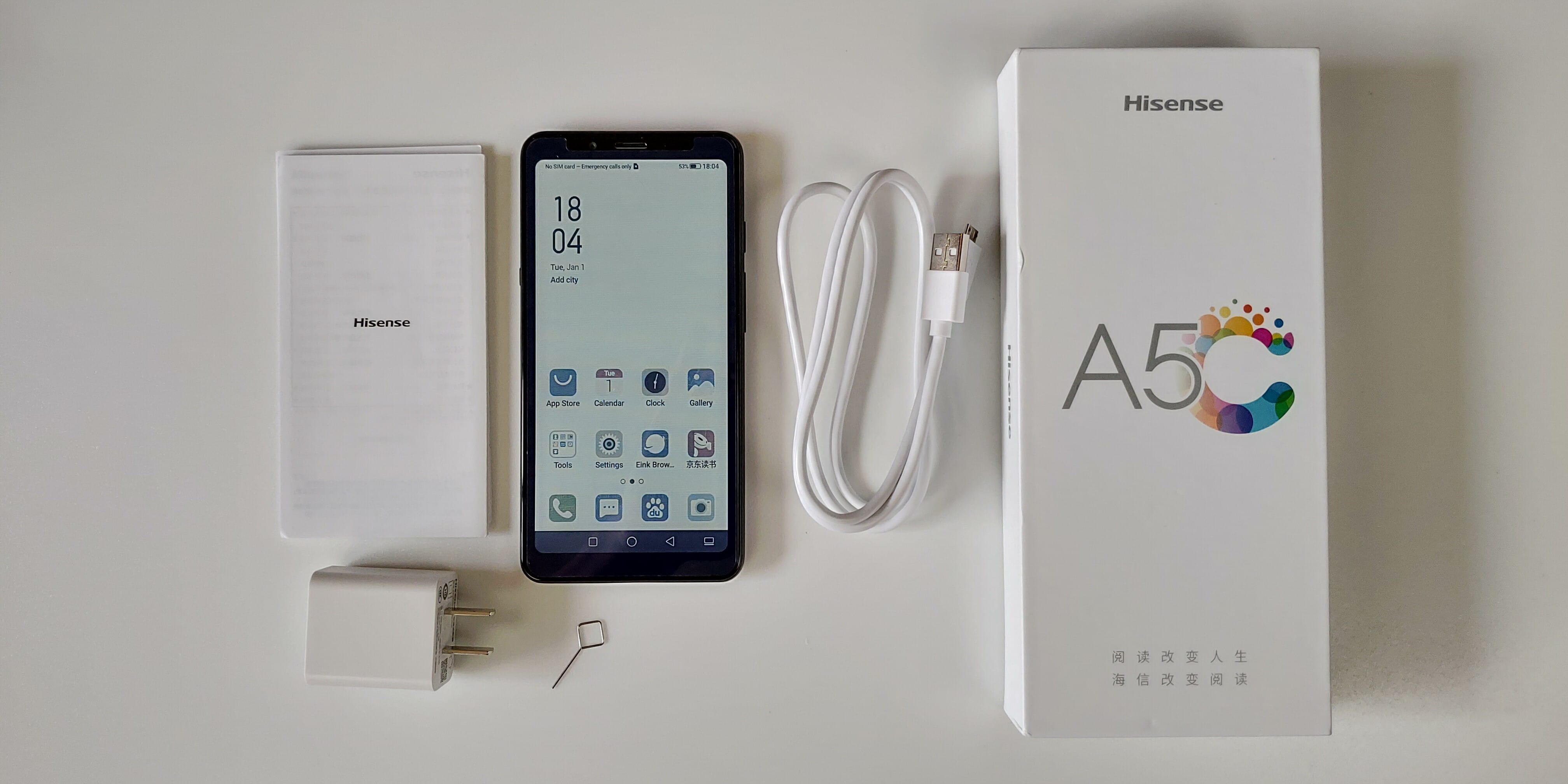 The Hisense A5C is the first color e-paper phone that is using the new E INK Kaleido. It features a 5.84 inch single screen with color E INK panel that is capable of displaying 4096 colors. It has a front lit display for reading in the dark. Underneath the hood is a Qualcomm Snapdragon 439 processor, 4GB of RAM and 64GB of storage. It has a rear facing camera capable of 13MP pictures and the front-facing camera is 5MP. The entire device is powered by a 4,000 mAh battery.

The HiSense A5C has a microSD card slot, micro USB charging port, Bluetooth and Wi-Fi connectivity, OTG, and a 3.5mm headphone jack. The operating system of the HiSense A5C color ink phone is Android 9 Pie OS. The Hisense A5c is available from Good e-Reader for $309.

When it comes to the retail packaging, the box is white. On the front is the model number A5C and the C is full color, which denotes that the device has a color screen. There is Chinese lettering on the bottom. On both sides of the both the Hisense logo is evident, otherwise there is nothing else. The back of the box has no tech specs or imagery, it simply has a ton of different certifications on the bottom, along with the IMEI number. I would have thought the company would have made more of an effort to make the box more visually stimulating.

When you open the box the Hisense A5C is enclosed in a static proof bag and underneath the enclosure is a portable wall charger. When you take the phone out of the box there is various documentation in Chinese, such as a quick start guide and warranty information. There is a SIM card removal pin and Micro USB cable to charge the device via your PC or the accompanied wall charger.

The front of the phone we are reviewing is white and and the back of the phone is black. The screen is completely flush with the bezel. There is a speaker on the very top, this is used to listen to people via phone calls, or to put them on speaker. This is also where music, audiobooks and other multimedia content will be played back from. No physical keys are on the front, everything is software.

On the right hand side of the device is a SIM card tray that can hold either 2 sim cards, or one sim card and SD card. There is also an E INK button below that. The right hand side has the volume up and down keys and the power button. There are no ports or buttons on top of the phone, but on the bottom is the USB port, 3.5mm headphone jack and microphone for phone calls. The back of the device is devoid of anything, but the camera on the upper left.