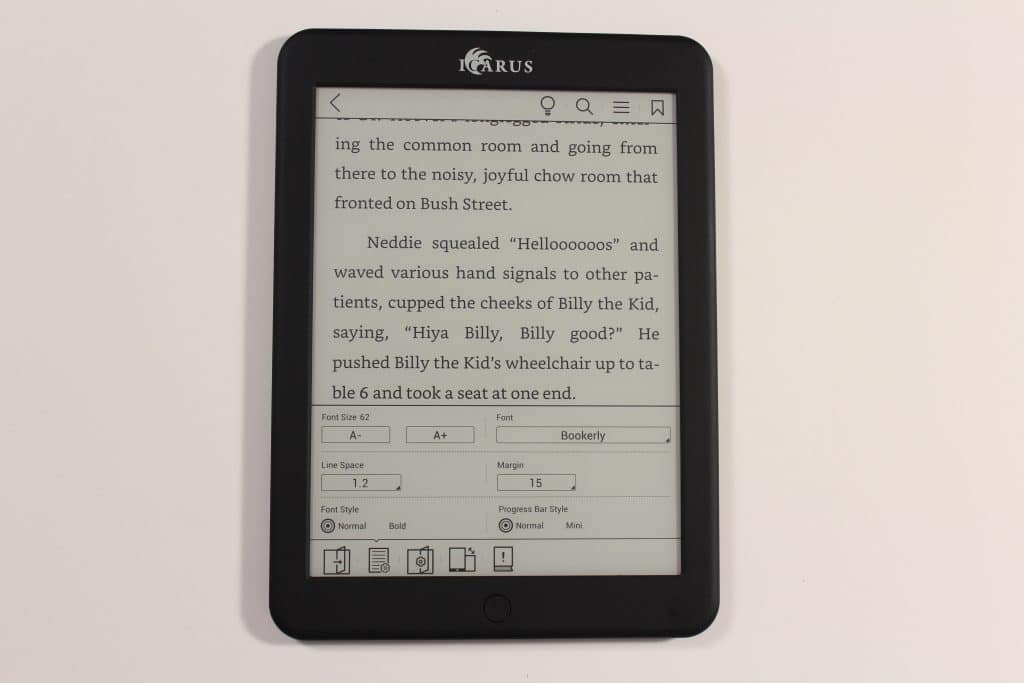 Icarus released the XL HD last year and it features a giant 7.8 inch screen and it runs Google Android so users can install their own apps.  This e-reader was only available to order from Europe, but now Good e-Reader is proud to offer this e-reader to customers in Canada and the US for $369.00.

The Icarus XL HD features a 7.8 inch E INk Carta display with Regal Waveform. The resolution is 1404×1872 and 300 PPI. Underneath the hood is a 1.8 GHZ processor, 1GB of RAM and 16GB of internal storage. It also has a 3.5mm headphone jack that you can use to plug in a pair of headphones or speakers. If you prefer to go wireless this device has Bluetooth.

The front-lit display is glorious and it has 10 LED lights which evenly distribute light across the screen. We review a lot of e-readers and normally we can tell exactly where the LED lights are positioned, due to light spillage from the LED lights, the Icarus is the exception. It was challenging to determine exactly where the LED lights were, because the lighting system is really polished. When you first turn the front-lit display on, it has a pale blue hue. After around five minutes the screen tends to warm up and the light is vibrantly white, a real pleasure to use. Unlike a bunch of other e-readers on the market the front-light on the XL can be completely turned off.

The XL HD has a number of hidden features that make it easy to use. It has an A2 mode that allows you to quickly use apps that employ animations or to scroll around on the internet. A2 mode basically degrades image quality to increase performance. You can turn it on or off by clicking the WIFI button on the bottom of the screen.