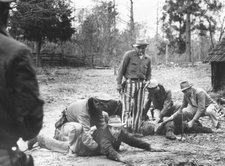 In an era where consumers have become accustomed to instant downloads and live streaming videos, some writers have found the processes of traditional publishing to be archaically slow. The length of time from finishing a manuscript to finding an agent for representation to finding a publisher to produce the final work can literally take years.

Stokes McMillan, author of One Night of Madness, self-published his non-fiction account of the man hunt and trial for three white men accused of assaulting and killing a black family in Jim Crow-era Mississippi because he didn’t have the time to spare. The ticking clock may seem a little melodramatic, considering that the events McMillan wrote about took place nearly sixty years ago.

“I inherited a scrapbook my mother had kept made up of news articles and photos surrounding this case,” explains McMillan. “Her father owned the town newspaper where this horrific incident happened, and my father took a national award winning photograph when the three men were arrested by an all-white sheriff’s posse. This scrapbook contained hundreds of articles and photographs and I knew with a little more research I could write the complete story.”

In the process of completing his research for his manuscript, McMillan came upon a terrible realization: the people involved in the arrest and the court proceedings were aging and in some cases, dying. McMillan wanted this book to be available to readers before too many of the key players were lost. Time was literally something he didn’t have.

“It took me seven years to write this book. I’d come home from work and the last thing I wanted to do was sit down and write about this crime, but I knew I needed to get this story out there. I finally discovered that I could do it if I got up early and wrote before going to work,” adds McMillan.

McMillan had an interesting vantage point on the entire event. As someone who grew up hearing about this case when his parents would pull out the scrapbook and talk about what happened, it was only later that he realized this case was not as widely known as some other horrible white-on-black crimes that took place in the Civil Rights era South.

“Mississippi rose up to do justice for this horrible crime. One reason this story has been forgotten is because justice was actually served. If the guilty men had been acquitted this would have made more waves.

“I found CreateSpace and they turned out a great quality product that I’m very proud of. I knew my writing wasn’t as polished as it could be since I’m not a writer by profession. I hired a distant relative who works as a copy editor for Harcourt and he helped me make it more professional. We worked together for a few months and helped make it an excellent book. Now, small town libraries and stores sell copies of the book, but it sells very well on Amazon.”