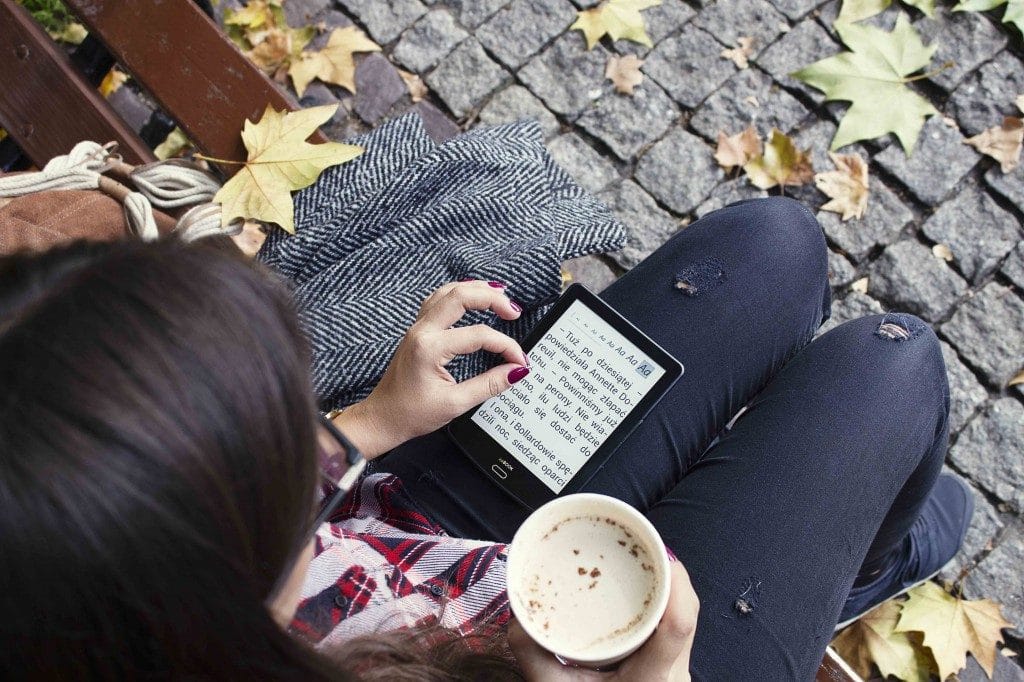 Arta Tech has been developing e-readers for a number of years and have scored a major victory with the InkBook Prime. The overall build quality premium device is really solid and it won a Red Dot award for industrial design.

The InkBook Prime features a six inch e-Ink Carta touchscreen with a resolution of 1024 x 758 and 212 PPI. The screen is completely flush with the bezel, this makes it easier to use the touchscreen. You can read in the dark via the front-lit display and it has 8 LED lights, which provides great illumination that is evenly distributed across the screen.

Many companies have abandoned manual page turn buttons and rely exclusively on the touchscreen to turn the pages of an e-book. The Prime has buttons on the left and right side, which means you can hold it with one hand and quickly flip pages. The back of the Prime has a grooved contour that is meant to assist in holding it with one hand.

I think page turn buttons are tremendous on e-readers. There is a large demographic of people who ride public transit and are holding onto a pole or guard rail with one hand and read with the other.

The 2000mAh Li-ION Polymer battery should last around four weeks of using the stock e-reading experience and the dimensions are 159×114×9 mm and weighs 168 g. It has wireless internet access and Bluetooth, but no speakers. You will be able to hook up a pair of Bluetooth headphones or speakers to the Prime and listen to music or an audiobook.

One of the downsides about the Prime is that WIFI tends to automatically shut off if you are not using it. This could be irksome if you are browsing a store and looking at the various titles on the screen, by the time you find something you like and click on the cover art the signal has to be reinitialized which takes time.

The Prime is running Android 4.2.2 and lets you install your own apps. There is a built in app store, but it only has a paltry selection of around 12 different e-reading apps. You might want to install the Good e-Reader App Store for E Ink which has thousands of apps and is optimized for e-readers.

There are a number of Prime apps that are available, such as a cloud storage system to house your entire e-book collection and also an RSS Reader so you can catch up on the latest news from your favorite blog. There is also a store to buy e-books, but it is primarily aimed at a Polish speaking audience. If you live in Western Europe or North America, you might want to install Amazon, B&N, Kobo or a number of other online retailers that have their own app.

The stock e-reading experience is fairly solid. It has a number of fonts available to increase the size and the font type. If you are feeling like you want Amazon Ember, Bookerly or the new Google Literata font, you can easily install it on your own. You can highlight words, make notes or lookup the meaning of the word, but there is no built in dictionary, you look up the meaning of the word via Google.

What I like about the Prime is that it has physical page turn buttons, so you have the option to hold it with one hand and turn the pages or simply using the touchscreen. This e-reader has WIFI, Bluetooth and Android 4.2.2.

The cons are the wireless internet constantly shutting off when it is idle for a few minutes and you have to visit the settings menu to have it scan again. I also don’t like how there is no built in dictionary and no dedicated English language bookstore.

The InkBook Prime retails for 139 € and is available on the main InkBook website.