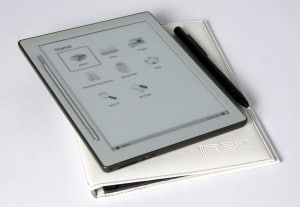 Here’s a piece of e-readers news that won’t be to the liking to fans of the iRex for sure but will perhaps bring on a smile on the faces of its competitors –  iRex Technologies has filed for bankruptcy in Netherland under Chapter 11 of bankruptcy protection. iRex hasn’t been in the news for quite some time and when it is, sadly its for all the wrong reasons, which iRex company representatives attribute to flagging sales of the DR800 e-reader. iRex manufactures the DR 800SG and the iRex 1000S rage if e-readers. iRex CEO, Hans Brons is of the opinion that missing out on the Christmas shopping season in 2009 owing to a delay in getting necessary approval from the FCC turned out to be critical for the company as it failed to find enough buyers for its DR800 e-reader and left the company in a cash-strapped state. Mr. Brons however wasn’t committed to explaining how introducing a product a few month behind schedule would turn out to be so devastating as to ruin a company’s coffers completely.

The real reason may perhaps lie in the activity of other players in the e-reader segment during this period. There was Barnes and Noble’s Nook e-reader and of course there’s the iPad as well since among the many things that the iPad is able to do is to don the mantle of an e-reader. And it does admirably well in this. In fact, many have found the iPad to be a much better e-book reading device in spite of it sporting an LCD screen while other e-readers come with the e-ink screen that is more optimized for a soothing reading experience.

Hans Brons though is putting up a bold face and would like us to believe that all is not lost after all. “It’s not a hopeless situation, but there is no cash and the banks are cautious at this time,” said Brons. So its bank balance may have reached nadir but it still can rely on healthy and strategic partnerships to come out of the hopeless situation that iRex- a Philips spinoff finds itself in right now.  “The expectations are still positive”, is what Mr. Brons had to say. It should be mentioned here that the Dutch company were the inventors of the electronic paper technology and were amongst the earliest players in the electronic reading device business.

The Netherland based company had already entered into a deal with several US retailers for distributing its range of touchscreen e-readers. Of these, the DR300SG was slated to be available from Barnes & Noble bookstores and Best Buy. iRex has not cleared the air on what will happen on those issues. Similarly, those who have already bought the DR800SG and Iliad e-readers are likely to find themselves in a confused state. Another issue that is haunting many is what is going to happen to the 3G connection of DR800SG’s 3G if iRex does not remain in the picture.

We will continue to appraise you of these as well as all the latest e-reader news.

And if you just joined in, the June issue of the Good E-Reader Magazine is already out and available. You need to subscribe to it to have all the stories and events from the tablet/slate or e-reader segment.