You are here: Home / e-Reader News / Is Barnes & Noble’s Nook a Kindle killer? 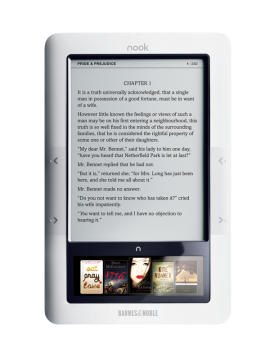 While information on Barnes & Noble’s new e-book reader, the Nook, has been trickling out for several days, the company unveiled the new $259 device on its Web site Tuesday a few hours before the official launch event in New York.

As previously reported, the Nook, billed as the first Android-powered e-book reader, features not only a 6-inch E-ink screen but a color touch screen that allows you to navigate content and also can turn into a virtual keyboard for searches. At launch, no separate Android apps will run on the device, but Barnes & Noble says that one of the reasons it chose Android to power the Nook is because it’s an open platform with a large developer community and that future apps are a possibility.

Like the Kindle, the Nook has a built-in 3G wireless connection (AT&T is the carrier) and a dictionary. However, the Nook also packs in Wi-Fi connectivity and a memory expansion slot–you get 2GB of internal memory, but can add up to a 16GB micro SD card.

It’s worth noting that initially Barnes & Noble said the WiFi connection would only work in its stores, where Nook owners would have have access to exclusive offers and free browsing of complete e-books. But later a PR person emailed us to say that, “The Wi-Fi connectivity will also work on other Wi-Fi networks to give you access to browse and download from the company’s digital store at fast broadband speeds.”

The Nook does weigh an ounce more than the Kindle (11.2 ounces vs. 10.2 ounces) and can’t match the Kindle’s battery life (10 days vs. 14 days). And while it does play back MP3 audio and has a built-in speaker, it doesn’t have the Kindle’s text-to-speech feature or a Web browser.

That said, Barnes & Noble is touting one very important new feature: the ability to lend out e-books you’ve purchased to friends for free for 14 days. The company says that you’ll be able to send e-books to a friend’s Nook, iPhone, or iPod Touch, select BlackBerry and Motorola smartphones, as well as Windows or Mac PCs that have the Barnes & Noble eReader software installed on them. However, not all e-books will be available for lending.

At the launch event, Barnes & Noble reps weren’t letting anybody touch the small number of working prototypes they had on hand, so we didn’t get a chance to actually play around with one ourselves, though we did see demos of various aspects of the device. The color touch screen uses capacitive technology and seemed quite responsive (as for it being as responsive as the iPhone’s screen, that was hard to tell). All in all, the device measured up quite well against the Kindle from a design standpoint, but what really sets the Nook apart is that color touch screen–it immediately catches your eye and represents a clear competitive advantage.