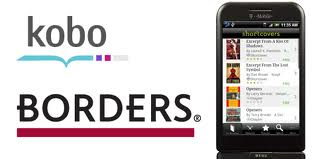 Some of the major buzz from the both publishing and bookselling industries today was the dire straits of Borders. Without a buyer stepping forward, it appears that the dreaded liquidation of the company and the resulting closure of the remaining 200-plus stores may happen after all. As news of the bankruptcy began to spread in the beginning of the year, the ultimate hope for the bookselling chain was that a buyer would materialize, but it looks as though that will not happen.

Today, Kobo issued an email to all of its subscribers and stakeholders offering them some hopeful news. The form email reported that there would be a change in the company’s privacy policy, news that generally doesn’t bode well for the consumers. In this case, however, the change comes on the heels of the partnership between Borders and Kobo. While Borders chose to invest in then-startup company Kobo back in 2009 to drive its digital content rather than develop its own brand-specific e-reader, it’s Kobo that may end up saving Borders instead of the other way around.

In essence, nothing about the users’ Kobo accounts will change, however, Kobo customers can choose to opt in to the ability to receive special offers and advertising from Borders. Customers who fail to reply by the July 31st deadline will not take advantage of the communications from Borders and their accounts will continue uninterrupted. Any customers who choose to register with Borders will simply receive news and advertising related to the new partnership.

Since Kobo announced this partnership and amended privacy policy on their website, it’s arguable that Borders plans to continue existing in some form of bookselling, despite the financial troubles. Whether they slowly morph into another company like Kobo for ebook content delivery or if they become an online retailer like Amazon remains to be seen. Even with the gloom-and-doom set prematurely announcing the end of Borders, both its company leadership and that of Kobo must be prepared to continue their partnership after the financial dust settles.