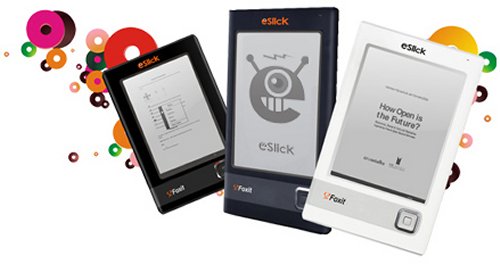 It seems the good old law of nature is playing its part in the e-reader segment. E-readers have had their time under the sun. There was a time when e-readers came to swamp the market with devices of all shapes and sizes, and of all hues and colors vied for consumer’s attention. The market was big enough to accommodate all of them and the concept still fresh. The end result, avid readers lapped up these e-book reading devices and there was enough for everybody to survive. The going wasn’t bad after all. Alas the good old days.

But then, as numbers swell, a shake-up becomes imminent and its only the fittest that gets to survive while the rest perish. We have had seen Irex and the Cool-ER e-readers running out of juice before and this time, its the eSlick e-reader’s turn to drive into the sunset. Of course, there is the other factor as well, like the iPad that is making life difficult for dedicated e-readers.

Foxit justified the move saying it needed to “eliminate the possibility of competing with our partners.” Foxit’s eSlick e-readers were once counted to be among the cheapest around and for its excellent support for PDF files. That the e-readers haven’t been updated ever since these came onto the scene back in the December of 2008 did not help things either. And with all the other e-readers resorting to slashing prices in order to survive, Foxit quickly lost the price advantage that it once enjoyed. Its e-readers with a 6 inch screen real estate and e-ink enabled black and white display will set you back by $200 now. This while the Kindles, the Nooks and the Sony e-readers come for less than that while offering much more in terms of features and support.

Cutting prices to remain competitive was never viable for a small company like Foxit and as part of its new restructuring plans, Foxit has said it will shut down its European operations and will work entirely out of its Fremont, California headquarters. It will now devote its resources on licensing the software technology that enabled its e-readers to read PDF and ePub files. The company said it expects a surge in digital reading and would like to cash in on that after exiting the hardware business.

So with brands like the Audiovox and Plastic Logic already having thrown in the towel and Foxit joining them, it seems there will be just three major survivors post e-reader upheaval: Amazon, Barnes & Noble and Sony.

Sure, a similar fate awaist the tablet industry in future. Though it might be booming right now, the bubble has to burst somewhere down the line. And it will only the fittest that will survive. As it has always been.