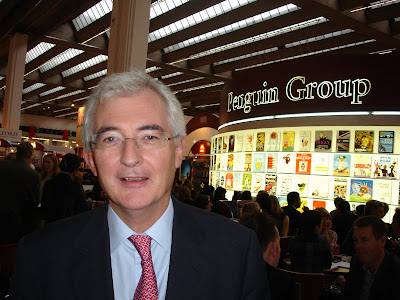 Penguin chief executive John Makinson proclaims himself as an eBook convert! On a recent trip to India, he had his iPad loaded up with a manuscript by John le Carré and some Portuguese classics (in English) ahead of Penguin launching a range in Brazil. He mentions that it simply “makes sense” to have books on one device instead of carrying an armload.

Penguin is celebrating its 75th year of being in business and repacking a wide array of books from the 60’s and 70’s. They must be feeling nostalgic about the past, but many publishing CEO’s are looking to the future.

The future seems to be ebooks and they are catching on like wildfire. Although ebooks only account for 1% of Penguins overall sales, other companies, such as Amazon, are reveling in glory.

Amazon recently has broken a number of records in the last few months, and released a new Kindle WI-FI E-Reader. Amazon recently had its first million ebook selling author, Stieg Larsson. Finally, they proclaimed that ebooks have outsold hardcovers.

Amazon is a pioneer in the branding and selling of electronic books online, and sees the majority of the success. Last Christmas they pulled in record sales in both Kindle and ebooks transactions, and have increased their market position as the store to beat for other companies such as Borders getting into the ebook game.

Like in any main market, there is jockeying for positions and we have already seen Federal Investigations about exclusive Authors being roped into exclusive ebook content distribution from Amazon and Apple. They see these tactics as anti-competitive and it remains to be seen if anything would be done about it.

In a recent interview with the Guardian Newspaper, the CEO of Penguin had this to say on his companies future of online content distribution.

“It does redefine what we do as publishers and I feel, compared with most of my counterparts, more optimistic about what this means for us,” he says. “Of course there are issues around copyright protection and there are worries around pricing and around piracy, royalty rates and so on, but there is also this huge opportunity to do more as publishers.”

Publishing, he says, must embrace innovation: “I am keen on the idea that every book that we put on to an iPad has an author interview, a video interview, at the beginning. I have no idea whether this is a good idea or not. There has to be a culture of experimentation, which doesn’t come naturally to book publishers. We publish a lot of historians, for example. They love the idea of using documentary footage to illustrate whatever it is they’re writing about.”

“The very definition of a book is up for grabs. If the consumer wants to buy a book in an electronic format now, you should let the consumer have it.”

Penguins profit is up to about 60 million dollars for this year so far and poises itself to be one of the leading ebook developers on the market.

Although some online spaces such as Amazon are seeing a revenue boom, and publishers such as Random House are seeing record sales, things aren’t so rosy for the brick and mortar stores. Barnes and Noble are facing financial turmoil and have hired lawyers and a new team to try and make the company more profitable. They have released 2 versions of the highly popular Nook E-Reader‘s and are working on another by the end of the year. Their ebook sales are stronger then other ebook spaces, but it is not enough to bring its chain of stores, supply pipelines, staff, and other facets of running a business the income they need.

More people are clambering to an E-Reader and a wider array of ebook stores to choose from. At first some of our Forum members at Good E-Reader admitted initial trepidation about buying an e-reader, but now they all admit that it was one of the best investments they ever made.

Unlike LCD screens, such as the iPad and Smart Phone, E-Ink provides a more visceral experience, much akin to real ink. If you have never experienced an e-reader before, you are really missing out. A lot of people agree with this sentiment and are saving a lot of money on ebooks vs. their hard copy counterparts.

Many new bestsellers that are hard covered cost anywhere between $20 to $50, whereas the ebook versions are often less than $12.00. So many avid readers are saving tons of money and are able to buy more, with less.

Amazon is not the only store seeing success, many authors are finding it easier than ever to write online. Companies such as iPulpfiction and Smashwords operate their own e-store, and allow their authors to submit their content to Sony, iBooks, and Barnes and Noble.