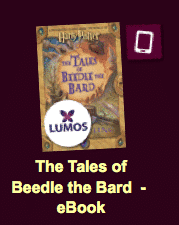 The Tales of Beedle the Bard is a collection of wizard fairy tales that was featured in Harry Potter and the Deathly Hallows. According to the press release, the book was released in hardback in 2008 and has raised large sums for Lumos, which is a foundation to benefit children living in large institutions. Rowling is the founder and Chair of Lumos.

The book is available from the Pottermore Shop and is selling for $5.99. I just ordered a copy for my Kindle and you know what I’ll be doing this afternoon. This is the first thing I’ve ordered from the Pottermore Shop and it was very easy.  After I purchased the book the download page asked me what I wanted to read it on. When I clicked “Kindle,” the shop linked itself to my Amazon account and then sent the book over to Amazon. It prompted me to go to the Amazon site, and there it was, ready to be sent to my iPad Mini.