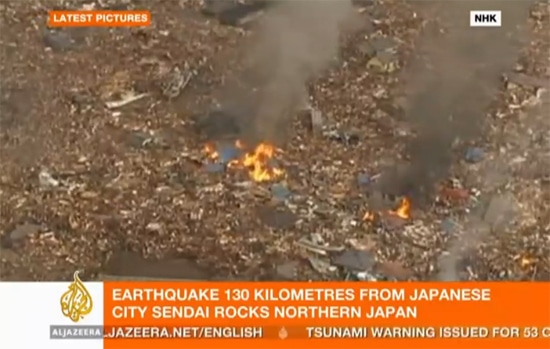 Normally we only post e-Reader and tablet PC news, but just now a huge 8.9 quake has hit Japan. There have been several strong aftershocks and a warning of a ten-meter tsunami following the quake, which caused buildings to shake violently in the capital Tokyo. The country is devastated by one of the highest earthquakes ever recorded. The runways at Sendai Airport have been submerged, with dozens of people seen on the roof of the terminal building.

One of the most terrifying images was seen as a mighty pool of debris carrying houses on fire sweeping over major highways across large area of coastal farmland.

This is considered the worst earthquake to hit Japan in over 300 years. The US Geological Survey said the massive quake struck off-shore 130km east of Sendai in Honshu at a depth of 24km. The earthquake was felt as far away as the Chinese capital of Beijing, 2,500km to the west. The Shinkansen bullet trains stopped when the quake struck, while five nuclear power plants in northern Japan have been shut down.

People in Indonesia, Philippines, Guam, the Marshall Islands, Papua New Guinea, Nauru, Micronesia, Taiwan and even Hawaii are on alert for tsunami waves.

Our thoughts, hopes, and prayers are with the people of Japan through this turbulent time.