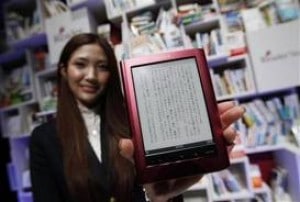 GoodEReader.com has reported on some of the limitations of digital publishing in some Western countries like Canada and Germany, where current legislation and cultural norms are throwing up roadblocks to the success of ebooks. But who would assume that one of the hotbeds of technological innovation, Japan, is facing the same reluctance to turn to digital reading?

With its reputation for embracing all-things tech and gadget, it still mystifies many market watchers that Japan has yet to latch onto e-reading the way other countries have adopted the model. Unnecessary obstacles like ebookstores that lack search capabilities and superfluous software downloads from each publisher just to read digital editions of many titles have led many Japanese readers to sit back and watch where the ebook trend goes.

Open ePub 3, launched by the IDPF at this year’s BookExpo America/IDPF Conference, was hailed as a vital innovation to the industry due in large part to its ability to present text in a variety of international language formats that do not read left-to-right, such as Japanese. That feature of ePub 3 was literally met with boisterous applause from those in the crowded conference hall, so why hasn’t this capability drawn in the individual Japanese reading consumer yet? With very few Japanese language titles available in the vertical column format that Japanese readers are accustomed to, even Kindle and Apple apps for e-reading haven’t been met with much success.

The reluctance to turn to digital reading may have a lot to do with the sheer improbability of trying to find, download, and read ebooks at the present time. Unlike many Western e-reading platforms that offer a handful of tablet and PC-based apps for digital reading, many publishers in Japan require the users to download a separate app to read ebooks from each publisher, making it impossible to consolidate one’s entire digital library. At the same time, price points on ebooks at the present time don’t make the hassle of downloading dozens of apps worth it, with most ebooks costing nearly 80% of the print price.

Fortunately, more and more international ebookstores are opening up globally thanks to the large distributors who have the power to consolidate titles, namely Kobo and Amazon. As more variety becomes available in readable formats that can be read across several devices, more international readers are likely to turn to digital and demand that the market keep up.