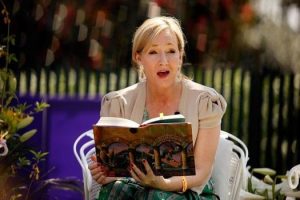 JK Rowling, author of the highly acclaimed bestselling Harry Potter series, spoke to over one million fans yesterday in a live webcast through Scholastic, Inc. The nearly hour-long webcast, broadcast via the internet to nearly a million students around the world, allowed participants to ask questions, learn more about the motivation behind the series, and garner interest in the Harry Potter Reading Club. Perhaps the most interesting turn of events during the broadcast, however, was Rowling’s admission that her next project will probably be a return to children’s literature, although she has spoken plainly in the past that she believes she is finished with the world of Harry Potter.

During the event, Rowling shared some behind-the-scenes and personal stories from her experiences with Harry Potter, such as registering herself on the Pottermore interactive website and finding out that the Sorting Hat had placed her in Gryffindor house, to the amusement of her young fans.

“We’re delighted that so many educators, parents and kids tuned into the live webcast and registered for The Harry Potter Reading Club, and we thank J.K. Rowling for sharing the magic of Harry Potter and her love of books and writing with our enthusiastic webcast audience,” said Ellie Berger, President, Scholastic Trade. “Scholastic has been in conversation with teachers, librarians, parents and other book lovers about ideas for bringing the Harry Potter books to new readers in exciting and different ways, and the webcast and Reading Club give us the perfect way to do that.”

Much of the focus of the event was to let participants know more about the Reading Club, along with informing educators, parents, and librarians about the options to find materials online to host their own local book clubs surrounding the world of the boy wizard. The full broadcast can be viewed HERE.